With the announcement of formats for the MTGO Community Cup, came a new wave of panic. 3 of the four challenges were going to be based on limited play skills, 2 of which I have limited to no experience with; MTGO Cube and Vintage Masters. I knew that in order to be a functional team member that I was going to have to pull my weight and learn at least a little about these formats, and try to figure out how best to cater to my play strengths. Since MTGO Cube is not up at the moment, I decided to first venture into the world of VMA Drafts. Now, it should be clear that I have never been a particularly strong drafter. I often eschewed Limited play in favor of Constructed, and have only typically played sealed when it comes to limited. I play in pre-releases regularly, and have always done well in those environments, and have found success in team sealed, 2 headed giant and other such events. It was not until the release of Conspiracy that I started to really find my stride in drafting, and have found modest success in the drafts that I have done of that. (Side note: Conspiracy is the BEST product I can think of to get your casual kitchen table EDH group to start drafting occasionally) I have drafted a few cubes now in my time, and those results are basically hit or miss. If I was going to get to where I wanted to be, I was going to have to get some help. Thankfully, I know a few people that would be able to help, and this week, called one in that I have the utmost respect for; Pro Tour Gatecrash Champion, Tom Martell.

Tom wrote a great article in the beginning of VMA release about the different archetypes within the set, and it was a huge help to me as a jumping off point. You can find it here. I also have watched Tom draft the format a few times on stream, most notably the time that he took all of his opponents directly to Value town with his Astral Slide deck featuring the King himself, Brago. That was really something to see. Tom graciously agreed to join me for my initial foray into the format and help to guide me through the draft and games. Here is the stream:

We were lucky enough to open a P1P1 Battle Screech, and from there it was basically elementary. The green splash came around at just the right time, and paid off in the long run with a late Tangle for the Sideboard. We did miss one Trapper due to a missed reservation on my part, but ultimately it didn’t really hurt us too much. Here is where we ended up at the end of the draft. 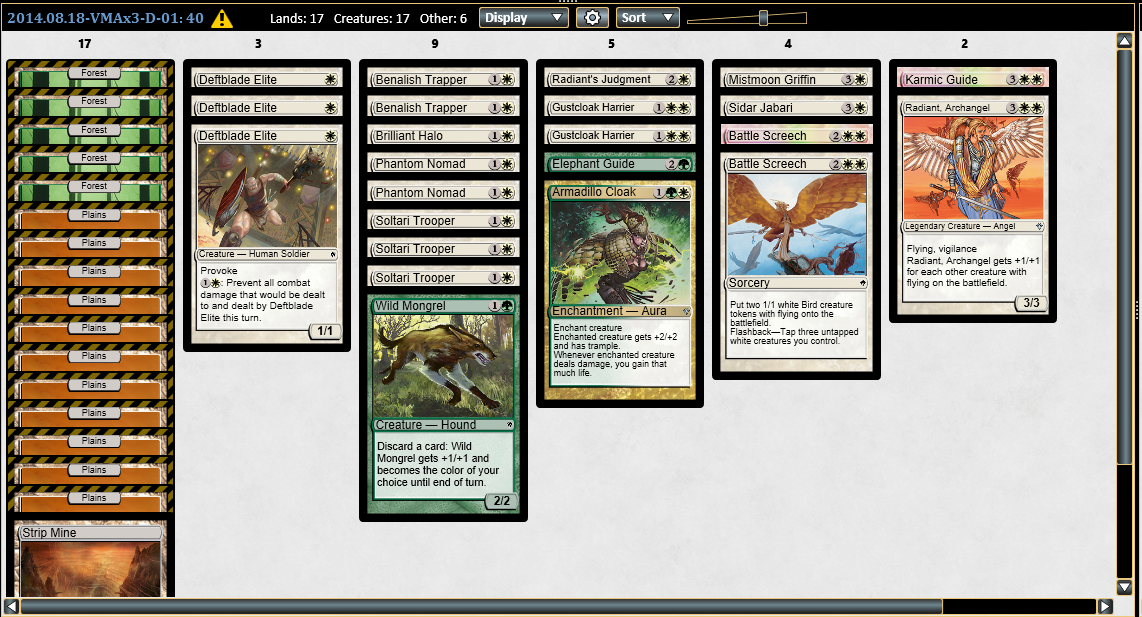 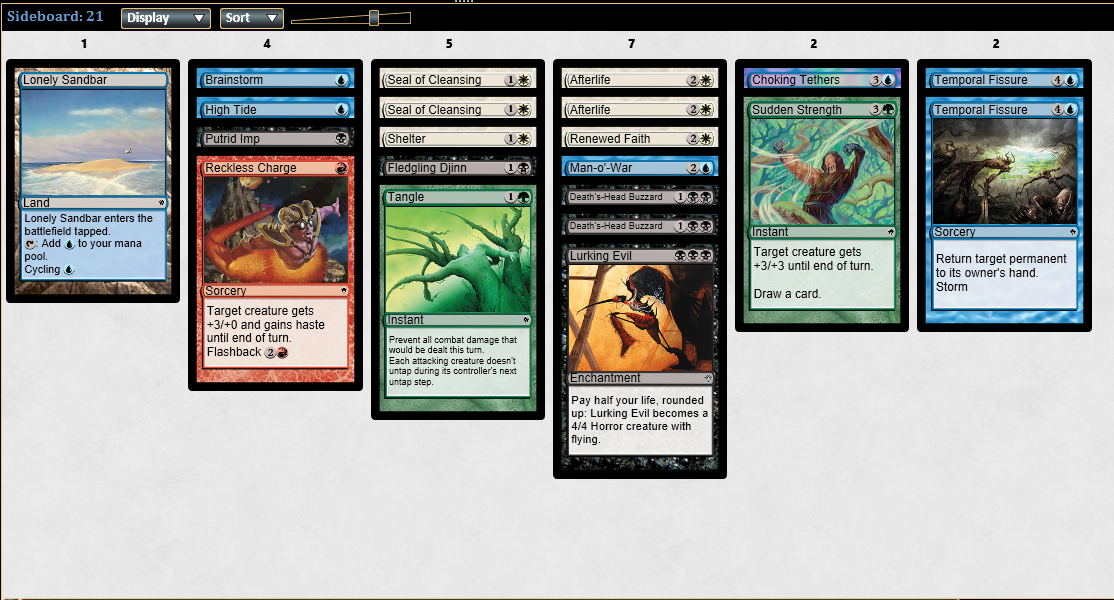 I was extremely overwhelmed by the power of the smaller creatures in this format. All I can remember about spoiler season for this set was realizing that most of the creatures were very small, and for the most part, they felt unimpressive by extension. This I believe was done on purpose to allow for a faster environment which could be hostile enough to bad storm decks that it kept them honest, and so that the games would be more interactive and less bomby. This balancing of creature size makes a card like Battle Screech all the more powerful, because the 1/1 fliers are a reasonable threat compared to most of the others on the table, and with one other white creature on the table when initially cast, Screech can be flashed back immediately with the tokens generated by the first one, making this a less mana intensive Lingering Souls, which at Uncommon nearly dictated the outcome of so many games in its own respective draft formats. Battle Screech being a common makes it even more likely to get multiples of them and thus even more oppressive. Most of our clock came from the powerful 3 copies of Soltari Trooper, a W1 creature with Shadow which is a 2/2 when it is attacking. This beater reliably came down on turn 2 and was simply attacking every turn until the opponent succumbed to it. I remember the feelings about Invisible Stalker in Innistrad limited, and this felt exactly like that. Tom had wonderful guidance for us during the draft, and of course his lines were mostly perfect. We only lost a single game through the whole draft, fueling us up for some more next week. I really do suggest listening to Tom and his analysis of the format in the beginning of the stream, as it really helped me understand what I was looking at and looking for in each pack as it came around.

In between rounds, we battled a little with a Standard deck that I have been tinkering with lately, and some of you have been asking about it since my WMCQ attendance. I was playing with a Naya Walkers or “Naya Bigrange” as it had been traditionally called since Journey into Nyx, and had not really picked up anything for Standard since M15, due to the Modern focus on developing the #TeamGeist deck with Larry and Jason. With Jund Walkers being the new It Girl, I thought that I might be able to take some of these changes and update the Naya list, as it was some amazing fun. I started by reading this, and then went on to build this before heading out to the site. 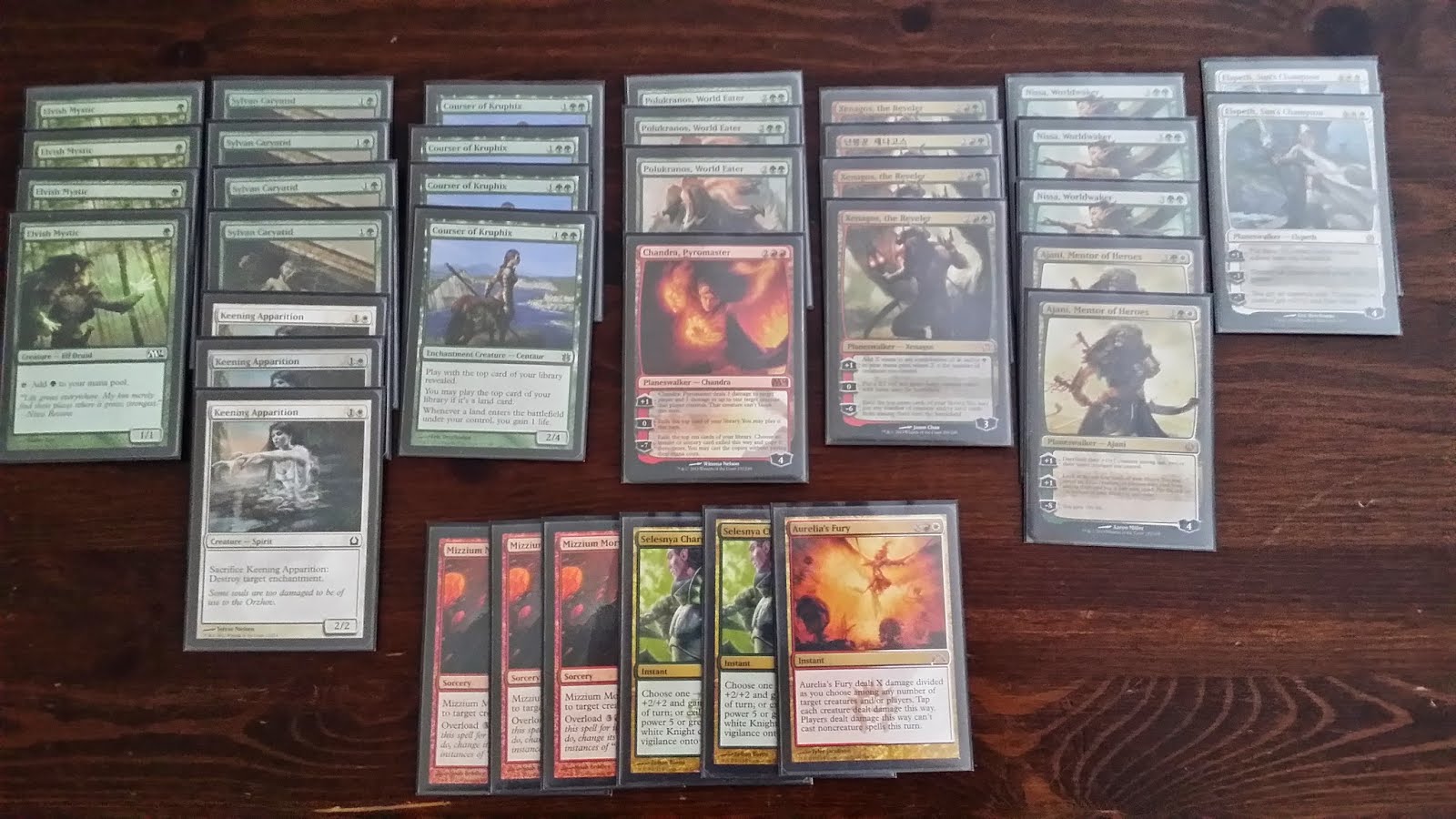 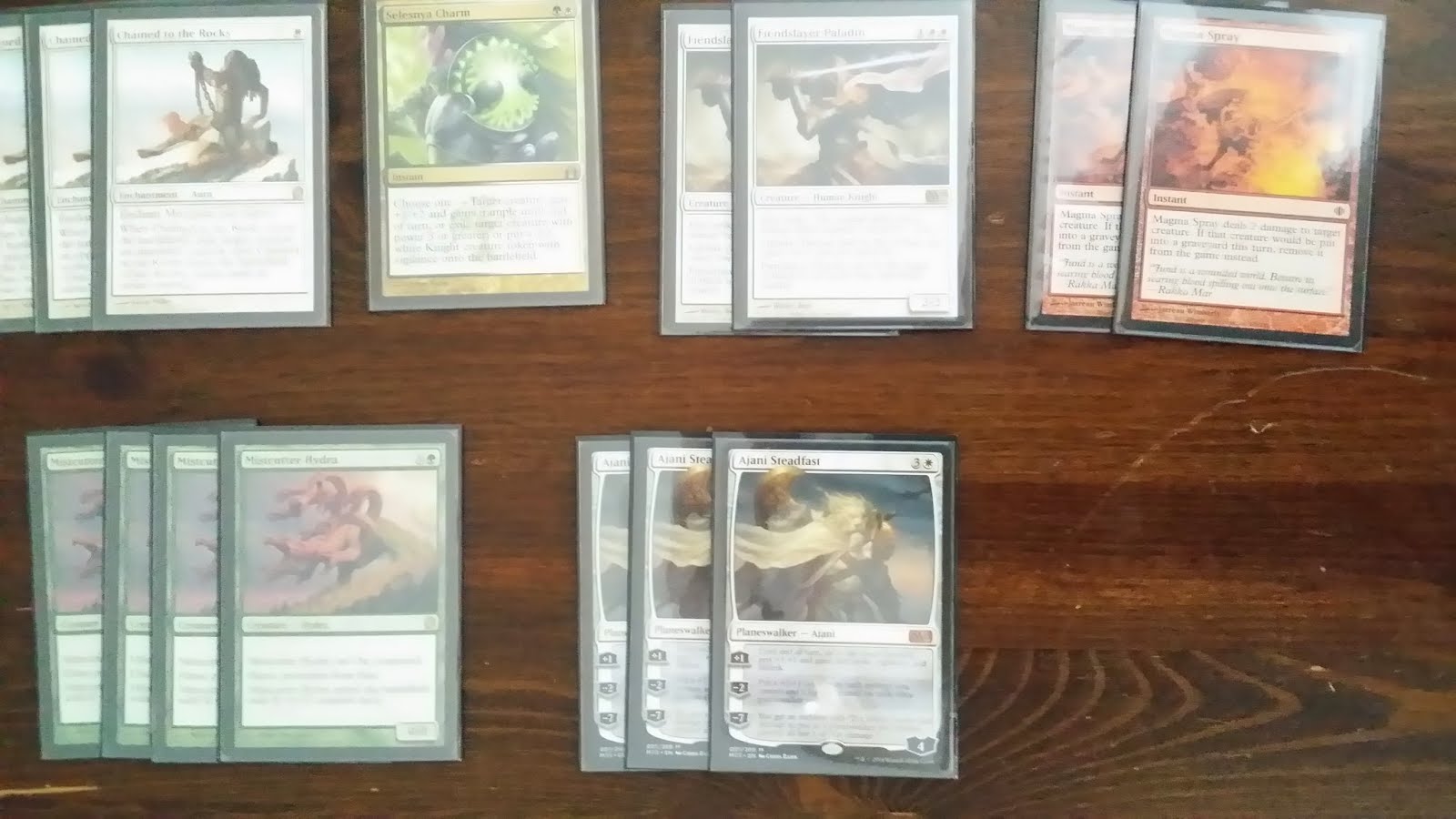 I got some great feedback from the Twittersphere, most notably Jeff Hoogland who commented on the oversight of Scavenging Ooze from the list, so I cut the 4th Xenagos and one Keening Apparition and figured I would battle some side events or friends while supporting my buddies. I was going to the site to get some WMCQ Geists for my modern deck, and was able to play some games with the deck while I was waiting for people. I was very impressed. I kept playing people and I kept winning. I beat Jund Monsters, Junk Walkers, Floch UW, decided that it was time to really look at the list. I got some help from Jacky Tang, (@evilkyt) who is a local stream regular, and a very capable player in his own right and we started to chip away at the list and work on the cohesive 75 by developing game plans for the field. Ultimately, here is where I ended up after taking it online and battling a bunch on MTGO. 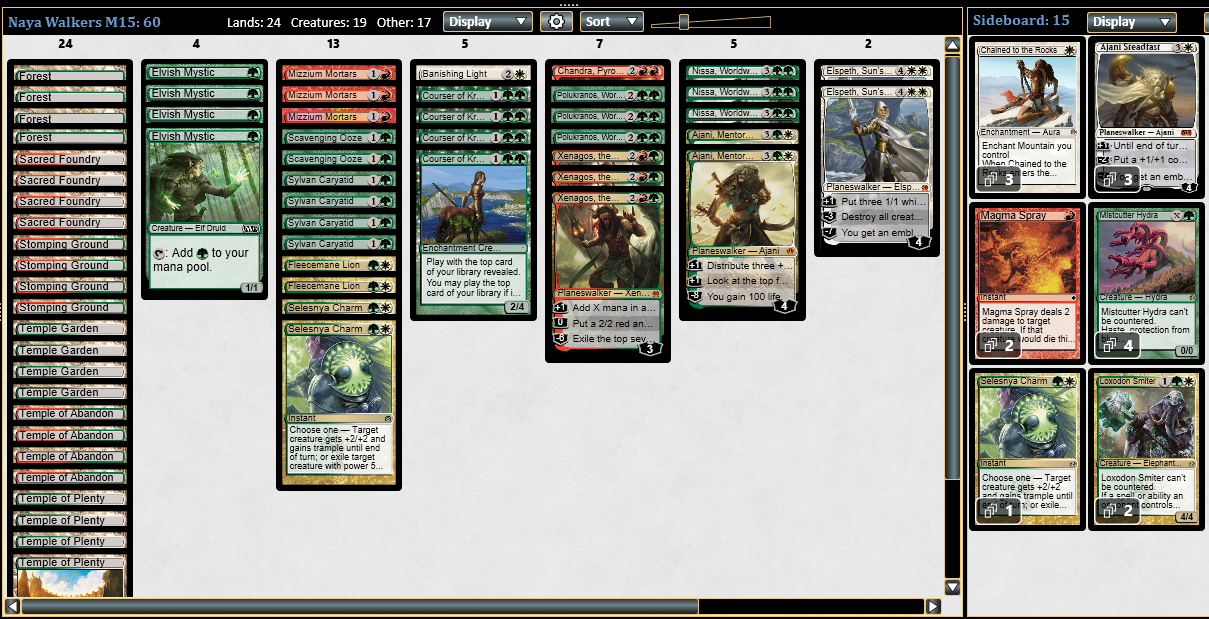 I definitely feel like this is a great deck for FNM, and a good place to be starting from post rotation. Many of the synergies are excellent, and so few of the cards actually rotate in September. Admittedly, the deck is super soft to T1 Thoughtseize, T2 Pack Rat, but most decks in Standard are in the same boat, so it’s up to you. These type of decks do make up about 23% of the online meta though, so it’s up to you. Mono Blue could probably use some help, and likely some number of Anger of the Gods should be played in the SB but I can’t really figure out a good plan for the deck using them with the heavy reliance on our mana guys. Your feedback as always is certainly welcome. I’m currently exploring Brimaz as an option with the 3rd Lion over the 3 Polukranos, as Lifebane Zombie is a beating, but I think that the deck needs Big Polly P or we trade in too many points versus Master of Waves for my liking. Thankfully, I don’t expect either of those cards to be big problems post rotation, so it’s entirely possible that Polukranos should just stay for now.

I’d love to hear more about your thoughts on the subject, and of course, huge thanks to all of you that are sending me resources on VMA archetypes and draft strategies. I have been reading voraciously and trying to sponge as much as I can. Tune in this week when I get my fellow MTGOCC team member Frank Lepore and Melissa DeTora on the show to help me through another VMA draft. Frank and Melissa ran well over 70 drafts in order to secure a set of Power in the process, so they definitely know what’s what in the format. You of course get the added bonus of their chemistry and humor with the knowledge, so don’t miss this one!

Let me know if you guys have any interest in spending an evening with me on CubeTutor.com to get the hang of drafting the MTGO Cube, because that’s something else that I’m going to have to do.