We are in the final stages of preparation for GP Boston. If you have been following our adventures here on LegitMTG, then you know that we have basically settled on 74/75 for the tournament, and that we have definitive plans for each matchup; not only what to bring in and out, but what our approach is, and how to accomplish those goals. There has been a lot of work going into this process, and I would certainly not have been able to be where I am today on the list without the amazing efforts of both Jason and Larry. I have been very fortunate to have been a part of this process, and I look forward to what I hope will be a great success for at least one of us.

Part of the preparation is of course the testing phase. I’ve started to really understand why Sideboard Guides are often left out of articles that are written. When preparing for specific match ups, it is far more important to understand what your goals are in the boarded games, and how to accomplish those goals, than knowing what the right tools are for that job. Without ever seeing it used before, and having no

instruction, how successful do you think you could apply a ratchet set? I now clearly understand the practical value behind testing. In fact, I would be confident now saying that I have a better format understanding now than I did before. In fact, I will now begin asking the right questions when approaching my testing for tournaments going forward. Do you know what the game plans of each deck are? Can you quickly narrow down the deck you are facing by the lands that they play on turns 1 and 2? What are the critical thresholds of each deck for mana in order to perform? What are the fundamental turns required for each combo deck in the format? How are you looking to disrupt or interact with these strategies? The goal from each training camp in sports is to come out the other side of it a better player than you were when you started. I can confidently say that I’m there this time.

Part of my role on the team is to narrow in on some of the more popular closer matchups for us and really dig into the play for them. I have been fortunate enough to be able to leverage some of my community connections and find us some high quality opponents to help us accomplish this. This week, we had UR Twin maestro Glenn McIelwain on the stream to help us understand the UR Twin matchup. Glenn has been playing Twin for almost as long as it has been a deck, and is one of the more highly regarded experts on the archetype. He had been working with Patrick Dickmann for some time on MTGO leading into PT Born of the Gods, and is widely regarded in Canada as one of the best least known players. He is a player’s player, as all of the notables here hold him in high esteem. Glenn had been on the stream before piloting GB Mutilate in Standard with us last summer, so when I asked him to join me for this special match focus, he was all in.

Here is the list that he was piloting for this session. 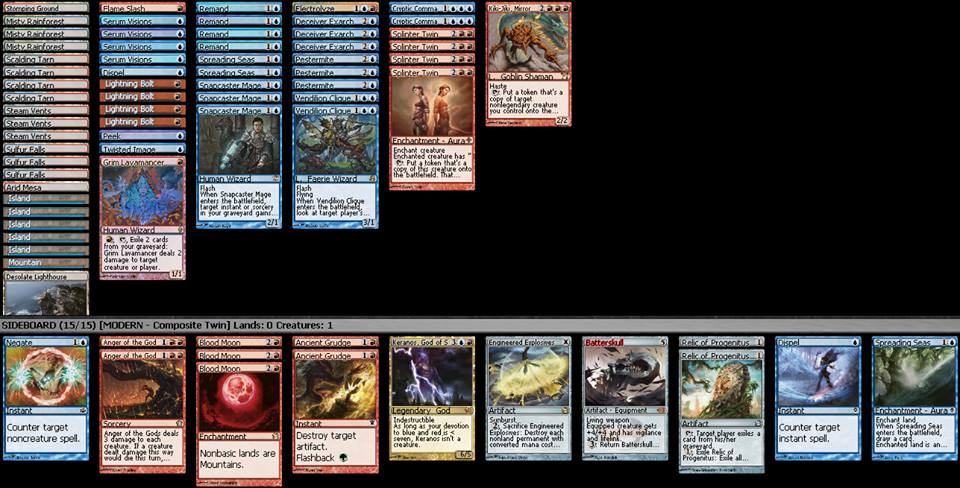 Glenn’s list is a functional amalgam of most of the regular lists of this archetype. Lists play 1-0 Dispel in main deck, 1-0 Electrolyze, etc.This would give us the best generic understanding of the deck while forcing us to play around the maximum number of answers and threats. Our game plan here was to try to resolve a Geist of Saint Traft, and then protect ourselves from the Splinter Twin combo while beating down. Geist of Saint Traft is a very powerful clock on the Splinter Twin deck since none of the removal that they possess is effective against it, and it hits hard. Post board, we were preparing for the traditional board plan from Twin, which sees the deck eschew most of the combo for a Tempo based UR Burn/Control deck with a foundation of Blood Moon crippling the opponent’s ability to play spells. These games tend to go much longer than game ones, so we were also bringing in our large trumps to try to break the late game stalls. The plan for the match going into this was:

This takes us deeper into a mid range strategy post board, with a number of ways to disrupt the Twin combo and deal with Blood Moon. Most of the burn is bad against the Exarch, making it a rough card to keep in. Keeping in some number of Helix was a concession to the grinding tempo burn plan that we would likely see post board. Glenn had some good feedback for us but we wanted to try out our plan to see if the matches played out as we expected. Here is the stream archive.

The matches ended up going long as expected post board. This was great news. The matches could be decided one way or the other on turn 3 however from both sides, making the requirement for faster, more mana efficient spells important. Blood Moon is a heck of a Magic card. Thankfully, so is Geist of Saint Traft. These are the 3 drops that can spell doom for the opponent should either sneak in under countermagic. In order for #TeamGeist to be successful against Twin, we need to try to play the same tempo game that Twin wants to play. We have better threats in this category, as many of our threats are mostly immune to Twin’s removal suite (Angel, Geist) or serve as good disruption (Vendilion Clique). We similarly have a higher volume of burn spells, and Electrolyze is one of our best cards against them, since it is always a 2 for 1 and sometimes you get to take your opponent on a one way trip to Value Town, population 341. Despite these seemingly favorable conditions, the Twin players are not without their own weapons against us. Some things to be aware of:

Blood Moon can and will lock you out of the game. Fetch accordingly. Don’t tap out into two or three mana unless its end of the opponent’s turn. You will need white mana to remove Blood Moon from the board. You have one basic Plains. Do the right thing.

Don’t be fooled into a false sense of security that the combo is out against you, especially in game 3. Even though it is generally correct to board out combo pieces in this match, if you are not careful, you can still get caught by crafty players looking to next level you. Respect everything.

Aggressive lines are generally correct. Keeping your Twin opponent on their heels is right where you want them. Bolt, snap Bolt, or turn 2 Snapcaster EOT in the opening lines of the game can make or break the game. Mana Efficiency and maintaining tempo advantage is going to be really important.

Given the new information we got from Glenn and how the games ended up playing out, we had to change the board plan. Here is the new way to battle this menace:

Lightning Helix we realized very quickly is basically unplayable in the world of Blood Moon. It also has far worse mana efficiency than Bolt, so the switch was easy. After watching the post board games, having a hand full of Path to Exile is just not where we want to be. You have to have some in the deck to respect the combo with Exarch, but 4 is decidedly too many; plus, Combust and Celestial Purge can basically perform the same function as a replacement. We needed answers to the dreaded Blood Moon of course, so Wear // Tear and Celestial Purge are our only ways to actually remove it from the table, while providing the same insurance against Kiki-Jiki and Splinter Twin. Counterflux can let us win counterspell wars, and protect our game winning threats. Batterskull can come in when we are on the play because the odds of us resolving one are better in games where we can be ahead of the opponent on mana, but is often too slow to run the second when we are on the draw. Our goal in this matchup is to basically become the UWR Flash deck from Standard gone by, and continually apply pressure to the opponent while limiting our interactions to the opposing turn, and by extension, maximizing our options.

I hope that you enjoyed this approach to testing, as we have one more of these on tap for tonight. I have enlisted the one and only Gerry T to help me out in testing the Scapeshift match vs #TeamGeist. He has been tinkering with the deck a bit lately, and has a lot of experience with the archetype as a whole. With Scapeshift being the deck that won the last Modern GP, it would be irresponsible of me NOT to run this match for all of us. This will be the last stream for me before the GP itself, and I couldn’t be more excited. I have some videos queued up also, so I might take a week off from the stream to recover from the trip.

Come tune in to watch Gerry try to mop the floor with us!!