This week I decided that I was going to run back the list from last week, since I was doing so well with it on mtgo during my offline testing. I was very close to deciding on this deck for GP Boston and especially since we lost the stream from the week before, a run back was in order. This week ended up being very valuable for me, since something happened that has forced some much needed introspection to occur, even if the results were led than optimal. Here is the list for reference.

I have been getting some very good results with this deck lately. Most of my play test sessions end up in my favor, and the non stream games on mtgo lately have been similarly successful. I really like the deck’s concept, and the tools I feel are well positioned in today’s metagame. I suffered a lot this week though, and I have preserved said suffering for all eternity and present it for you below.

There is a reason that I titled this week’s article as it is. Yes. That was painful. I’ve been really busy trying to analyze what happened to me in that GW game. It’s not like me to make these types of errors generally in paper. It does happen much more regularly in the mtgo arena, and specifically when streaming. I am more aware of the clock on mtgo, as I have lost too many games for my liking from running out of time when I certainly would have won with even 30 more seconds on the clock. Because I’m spending time listening to the feedback and advice in the chat, my play is a lot slower than it would be in offline or paper scenarios. This often leads me to rush some of the simple things and make errors in order to try to offset the chat induced clock consumption. I do dumb things like miss land drops, click through phases, and miss priority holds. I’ve also more than once conceded a match when I meant to concede a game. I have a tendency to get sloppy or rather, rush some fundamentals when I feel behind the clock, and it costs me a lot of games in hindsight.

There was a great discussion piece that came out of the GW Hatebears match though, since it made me realize something which did indeed move over into a real discussion on Twitter; I am a Puntaholic. I posted this on my personal Facebook page, and the responses were amazing. 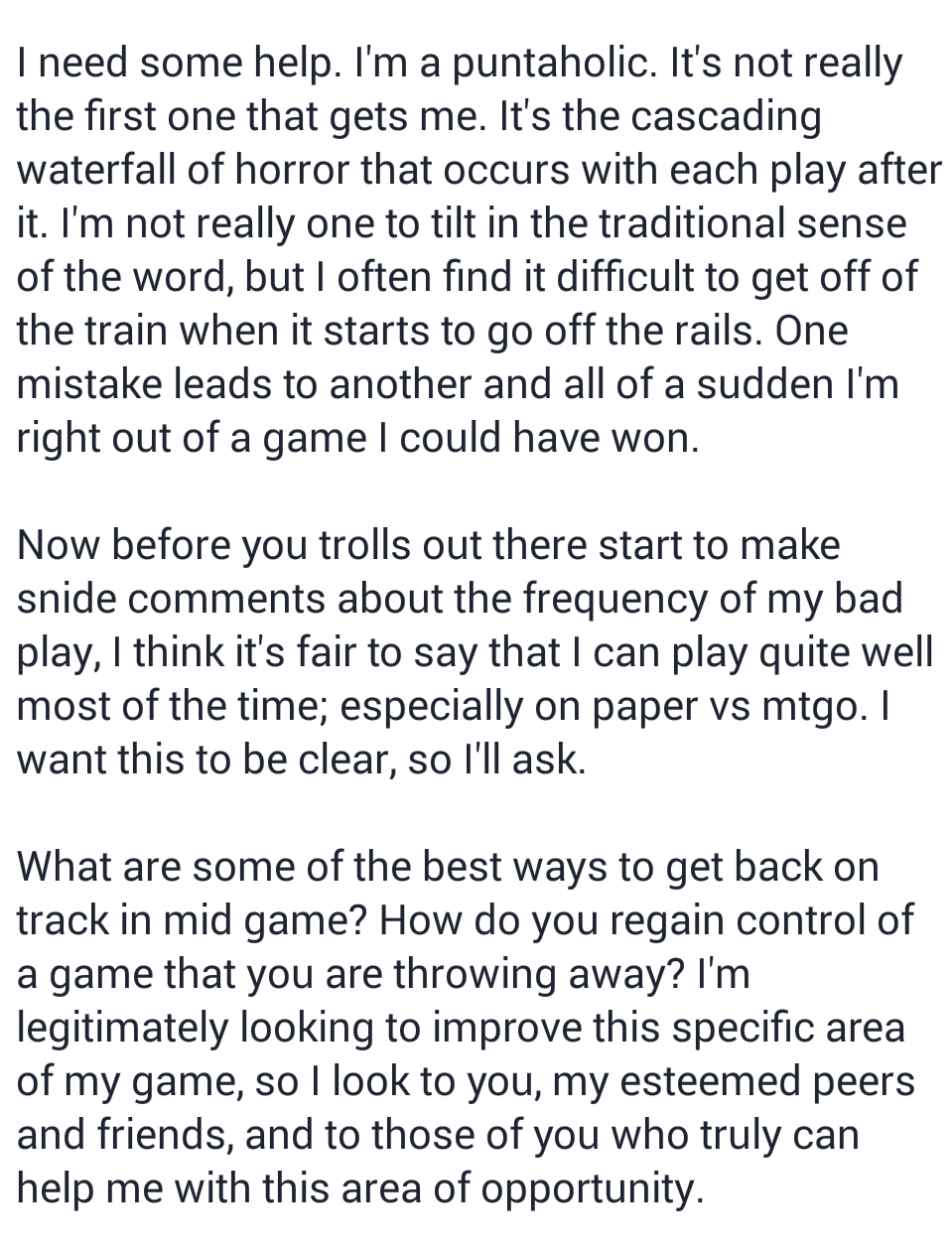 The responses I got were amazing. I can honestly say that I read every comment, and have processed each one with due time. I have some issues coming back from the brink once I’ve started to make decisions from a place of tilt. I found this to be especially true on stream. I make an error, and then everyone is so graciously generous with feedback about what I should have done instead. I then, if fresh off the error, make an over correction to try to bring about the end result which was initially intended. This often puts me in a much worse position in the long run than I would have been if I simply acknowledged the error and made the best of the new situation. Pretty wise sounding isn’t it? Well, I didn’t come to this alone. I had a bunch of people to help me. Here are some of the bits of advice I got. 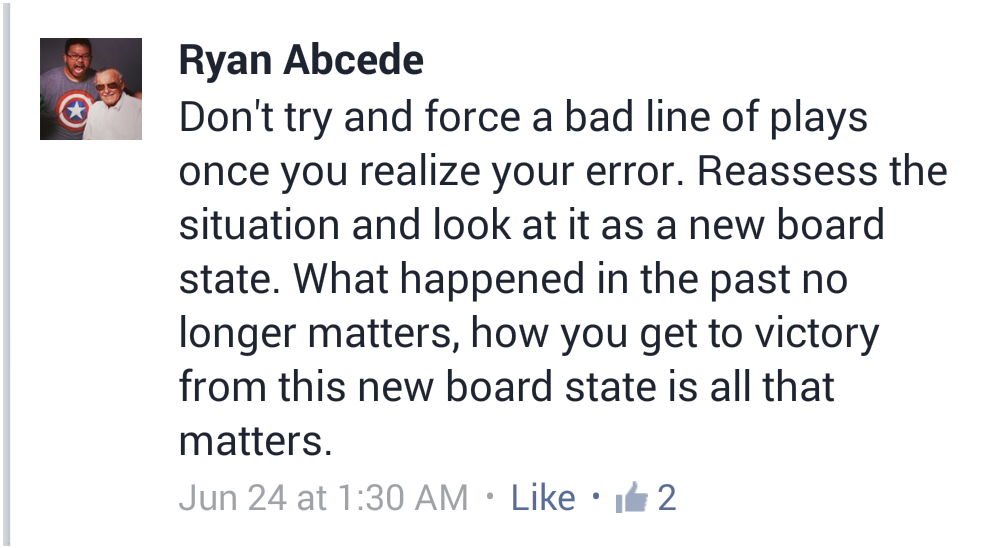 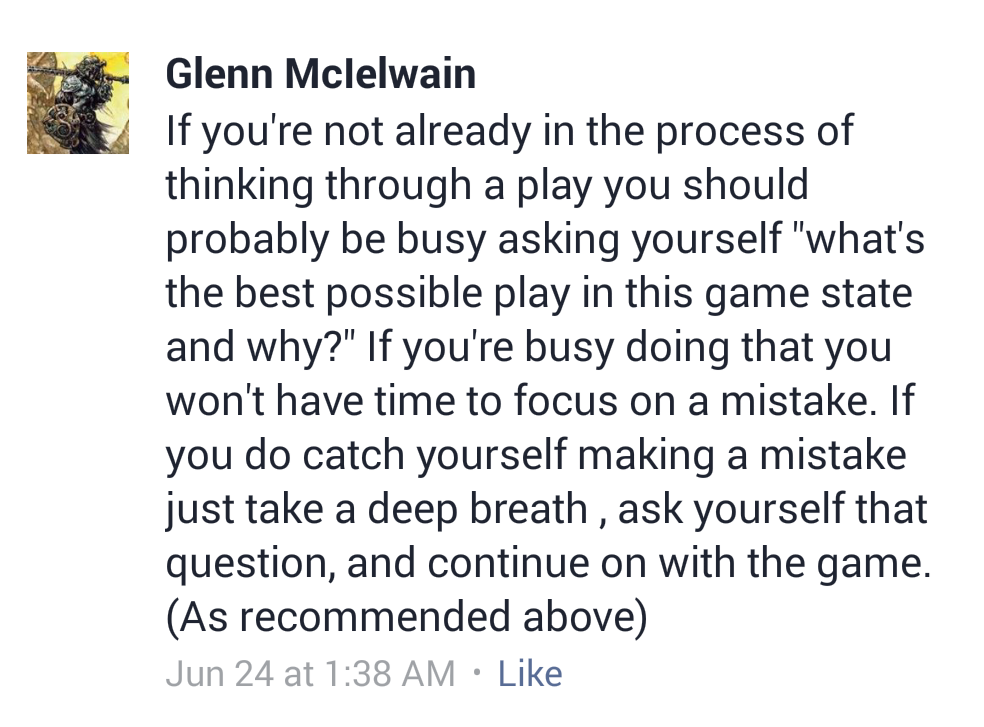 Both of these ideas were exactly what I needed to hear. I should be evaluating the board and potential play lines constantly. I have been finding myself in situations where I either get locked in to a line of play, and when something about the board state changes, even subtly, I still look to follow through. This has caused me to miss lethal attacks from my opponent, and even miscalculate damage races, losing games that I would otherwise be able to win. I also have found myself backed into corners which I create for myself by not dealing with threats in a correct or timely fashion, and then turtling up, and playing too defensively. Thankfully, there was help for that too: 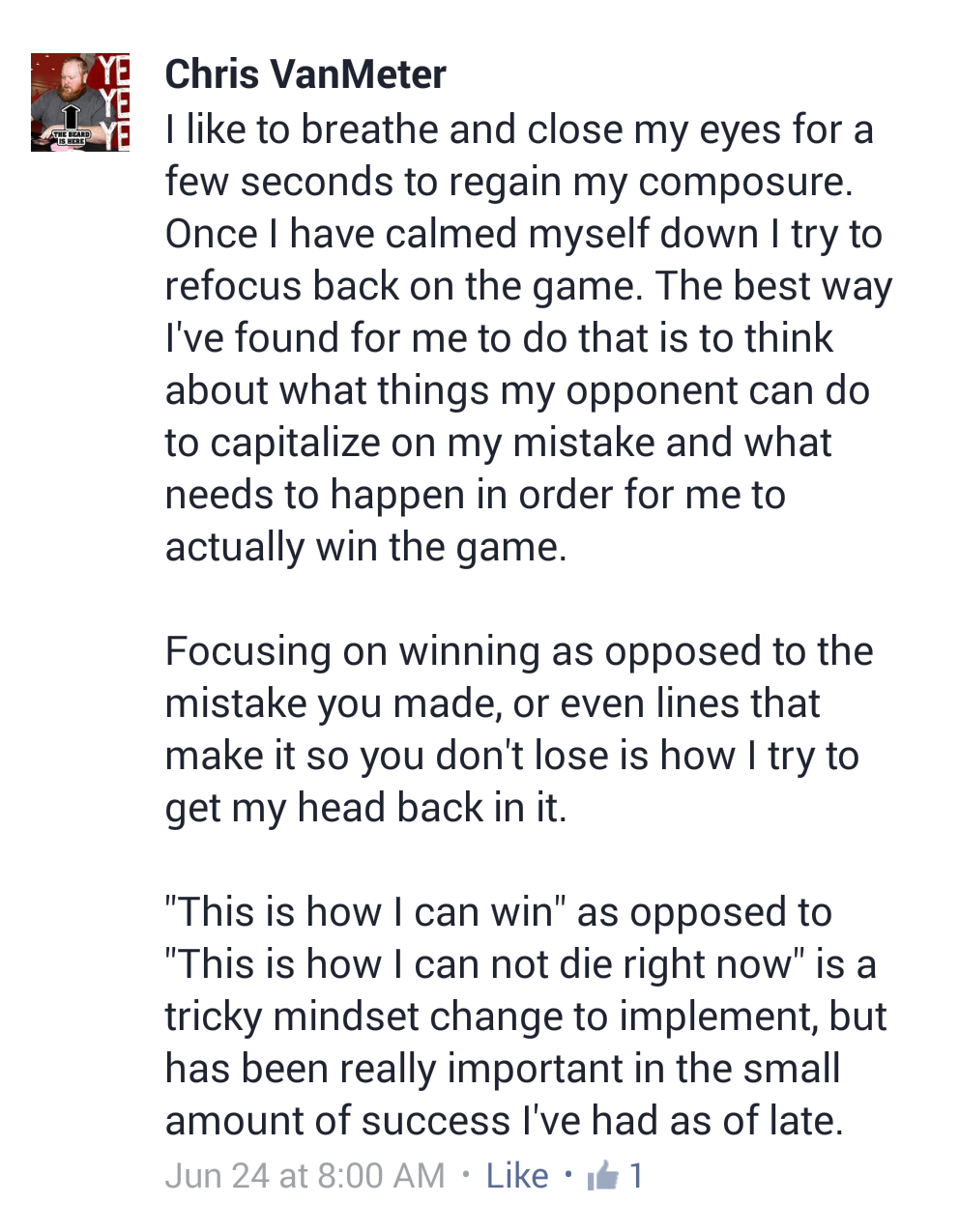 Truthfully, this whole stream experience has been amazing. Being able to connect with all of you to share the education about this game that we all love which we find together is surreal. I started the stream with the goal of education. Learning how to play better, what tricks to look out for, when to switch gears, when to jam, and when to hold back. We even learned when to use fetchlands for goodness sake!! I have been working hard at putting all of this together and becoming a better Magic player overall. In the 2 years that I have been doing this, my finishes have been higher, my play has been crisper, and my confidence has been higher. It really is amazing. It has all helped to form a mindset which propels me towards improvement and success. It is summed up very well here.

With the GP coming up in a few weeks, I will be narrowing down to the final list very soon. In order to make the most educated decision possible, I have one more deck which I need to play for you. Jund has always been one of the front runners for my deck choice. Let’s be honest, I’ve simply played more of the deck that any other in modern. There have been a lot of articles coming in lately about the deck, and in fact, many of the authors and pros whom I respect highly have been advocating a move away from the red cards in Jund and instead opting for a more consistent mana base and playing GB Midrange. Saito, Gerry, and even Willy have all indicated that it’s likely the ideal shell currently for Bob, Goyf and Liliana, so it obviously must be played. Thankfully, there is a local gentlemen whom I know has been playing the deck an awful lot, and has his version well tuned to the point that he feels it’s at least 2-3 months ahead of the Japanese. Ontario State Champion Matt Mealing will be joining us on the show this week, and we will be bringing the pain. Come check it out!!

Also, I will be adding Playmats to support the stream shortly. They will be based on the stream layout, and will feature the Deathrite Shaman art proudly. I’m trying to keep these low on the cost front, since I really just want to let you show the love for the stream. Look for the artwork and details coming soon to the Twitch page for the stream. Hope you all will like them!!