Hello everyone, and welcome back to LegitMTG for another article. My apologies for skipping last week, however I am fully energized, and ready to go. Lately the conversation in and around the game has been about companions, and their impact on the game. However there are some archetypes that not only have withstood this storm of new cards, but do not need them. Today’s discussion is about one of those decks which has become one of the oldest in Modern, and that deck is Tron. 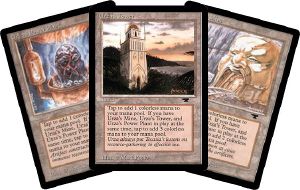 The name Tron, shortened from UrzaTron, has been a part of the game’s lexicon since The Antiquities expansion was released. Combined the lands Urza’s Mine, Urza’s Power Plant, and Urza’s Tower can produce a total of 7 colorless mana. This brought forth thoughts of how the lions from the cartoon Voltron would form to create a robot that was stronger together than the sum of its parts. Shortening from Voltron to Tron, then adding Urza to it to become UrzaTron, the archetype was born.

While the early days gave us cards that were a bit awkward by today’s standards (such as Triskelion, and The Hive) the cards included with these lands have grown stronger over time. Cards such as Meloku, the Clouded Mirror, Invoke the Firemind, Tooth and Nail, and even Dragonstorm have all been included in various Tron decks across Standard’s history. However where these lands shine currently is Modern.

Starting with a Gruul version using red cards such as Pyroclasm, along with artifact hate from the board the deck would power out a big creature, or a planeswalker, to take over the game. The choices in those early years were limited to Wurmcoil Engine or Karn, Liberated. However those two cards would form the backbone of the deck through Modern’s early years, and are still present to this day. Let’s take a look at an updated list.

Using your green ramp spells, such as Ancient Stirrings, you want to assemble the three Urza lands as quickly as possible. Optimally you’ll do that by turn three as your threats will burn through opposing counterspells, and removal until your opponents run out of answers. Even your artifacts can help you change your mana for your green spells, as well as search for lands, so don’t discount their inclusion. You’ll also notice the deck uses two versions of Karn. Karn, Liberated can help deal with problematic permanents, or remove cards from your opponent’s hand. Don’t be afraid to reset the game if you face an opponent that’s difficult to defeat because everything this Karn exiles will be in play under your control. Karn, the Great Creator on the other hand can allow you to find key cards in your sideboard (such as Ensnaring Bridge against aggro decks) to keep you alive long enough to find an answer to the opponent’s board. In a pinch he can even make an artifact you control a creature allowing you to attack or block as needed. Landing a Wurmcoil Engine, or even an Ulamog, the Ceaseless Hunger is your endgame. These threats are quite challenging for opponents to answer.

Why this may be for you

Why this may not be for you

While on the surface this deck appears simple in it’s game play it can be a challenge to learn, and find the correct paths to take during the course of the game. It is true that the replay value of this deck can seem rather low as it plays nearly the same way every game, but one of it’s appealing factors is how little it has been impacted with new Standard cards. That’s something that is rarely said in this age of design that seems to have pushed this constant need to always rebuild your Modern deck every time new Standard cards are released. Let’s look at how Tron has been impacted by new Standard cards over the last 5 years..

Here are the cards that have been added to Tron in the last 5 years.

That’s it. That’s the list. Now I know this assumes you already have a collection of cards prior to 2015, or have picked up cards reprinted since then (which most of them have been), however even this version of the deck is under $1,000. I know that’s a lot of money, but it’s also on the more affordable end of decks in the format. You can even have this deck for under $300 on Magic Online, and use your winnings to build up to the deck in paper. One thing that does make this deck affordable in paper is that many of the pieces are printed as common allowing them to be played in the Pauper format. There’s nothing wrong with building this deck (or other archetypes that can port into Modern) in Pauper first while you pick up the pieces for the full on Modern version. As a deck that has not changed much in the last 5 years, and (in my opinion) very safe from any bans due to other mistakes in the metagame not addressed, this would be a deck I would recommend having in your arsenal.

Modern has been in a state of constant change for well over a year. It was initially a format where one could play their Standard cards once they rotated out of that format, and an affordable landing spot for players who wish to play beyond Standard, but could not afford Legacy. We can make it that way again, and playing decks that are resistant to new Standard cards can help shift the course of the format back in that direction.

What are your thoughts on Tron? What’s the most unusual card you have played in the deck that worked? Have you played other variants such as Azorius, Mono Blue, Mono Black, or even Mono Red? Make sure to comment below, and follow me on Twitter as well as Facebook.

I will return with more musings about the game so stay tuned.

Until then…
TAP MORE MANA!!!