I am not the smartest person. I’ve went through great lengths to get on a better sleep schedule, and it’s went really well. Waking up at 7 and going to bed at 10 may not be much for everyone else, but I crave structure. It also makes me feel a little bit more like a normal person. I am of course, up at nearly 3am writing this piece, because I said it would be up today, and because I got sucked in hard to the new Legion content in World of Warcraft.

Yeah I could have stopped after I ran my main through some invasions and the Broken Isles questline. I could have stopped after I sent my Horde toon through the same thing, but I eventually sent a third hunter, a warlock, a mage and a priest through the same stuff. That takes a lot of time, and a lot of cinematics played, and before I knew it, I was considering the folly of my decision processes for the day.

Anyways I played a lot of WoW today, and got one of the ugliest weapons for hunters of all time. 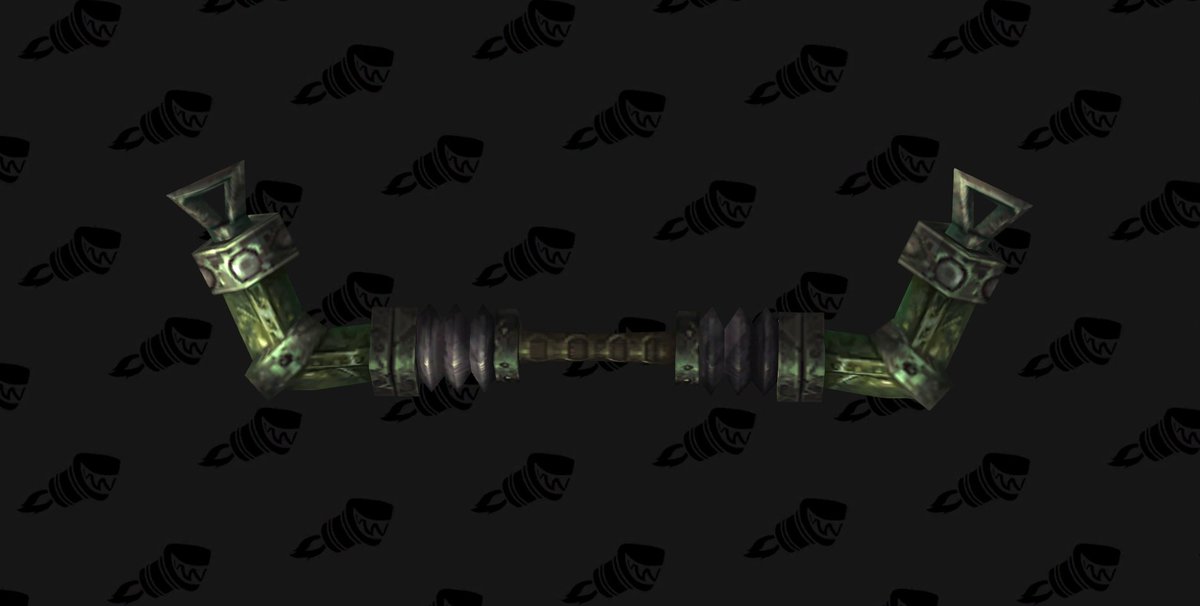 I did want to talk about sideboarding with the deck, and today I am going to do that. We’re going to use two different resources for this, the MTGO PT Gauntlet, which you can find here, and after those decks are hit on, we’ll fill in any holes with MTGGoldfish and their wonderful metagame site.

First up on the list is BW Control. The winning deck from the Pro Tour has some unique threats for us, but also has some pretty meh cards. Going with Lukas Blohon’s list actually works out a little bit better for us, because there is a lack of Secure the Wastes and Westvale Abbey. Those two cards are really hard for the deck to deal with, and I made sure to note Secure when I wrote about Collective Brutality.

Threats in this deck include the six planeswalkers and the seven creatures. Anguished Unmaking also puts a hurt on the combo. Of the Planeswalkers, Liliana, the Last Hope is the most threatening. Sure the first two abilities really do not hurt us, though the second is much worse if they can get a creature back, but the ultimate of Liliana is pretty close to game over for us. Yes we have removal, but the constant stream of Zombies is too much to deal with. Sorin would be second on the list, because of his +1. We can deal with the ultimate and it’s not like the -x ability has a lot of targets for us.

There are a lot of dead cards in the main for both decks, but we at least get good use out of our Grasp of Darkness (kills six of the seven creatures), and our Ruinous Paths. Our discard is also very good against them. They have Languish, Grasp, Ultimate Price, and Hallowed Moonlight which are pretty much just going to sit in their hands and take up space for game one.

Game two they are going to bring in more hand disruption. Duress will join Transgress the Mind, and I would imagine that they would bring in the additional copies of Transgress the Mind and Anguished Unmaking. They also get to up the threat count with Gideon, Ally of Zendikar.

So that leaves us with some changes to make after the board. This is what I would do.

Duress is great against spell heavy decks like BW Control. Path deals with any walker that might have slipped under the discard, and Chandra gives us another threat. Taking out mass removal makes the most sense. We keep in Grasp because it kills everything but Linvala, the Preserver. Collective Brutality comes out because it’s not killing anything, the life gain is not a huge deal, and it’s limited what we can discard. Read the Bones loses a copy as well.

Next up, Temur Emerge.

Owen’s deck is the one featured so we will be running with that one. Emrakul, the Promised End and Elder Deep-Fiend are the biggest threats here, but we cannot discount Ishkanah, Grafwidow. The rest of the creatures are easy to deal with. The spells are things that do not impact our board, but do advance our opponents game plan. The lone Chandra, Flamecaller can cause some issues as well.

Here is how I board.

Flaying Tendrils kills next to nothing in the deck, Languish does not really kill the important creatures, so we added three ways to kill the important ones, and one way to proactively deal with the fatty dumb dumbs. I would almost always name Emrakul first, but for sure pay attention to the game state and name whatever is appropriate.

Bant Company is next.

LSVs list is something that appears to be a stock list. Game one we are going to lean heavily on our Languishes, and we really should be fine as long as they do not have their most insane draw.

Here is my current board plan

They will more than likely bring in three pieces of counter magic, but as long as our Languish does not get blown out, this matchup is mainly about playing around Dromoka’s Command. We have plenty of removal and disruption and again while it is winnable for them it feels like a good matchup.

Liliana is back, as is Ishkanah and Emrakul, though in smaller numbers. They have next to no disruption for us in the main deck, but Grim Flayer can do some absurd things, and Sylvan Advocate is of course a solid cheap beater. Tireless Tracker also has the potential to do real work against us. Be careful about Emrakul, if you can keep Nissa from flipping do so, and be comfortable that in game one, there is next to nothing they can do about a gifted Pact.

Post board I think they would be best to board in to their Seasons Past configuration. They will bring in Duress, Transgress, Seasons Past, Conclave Naturalists, and maybe Kalitas.

We answer with these additions

In: 1 Chandra
Out: Tendrils

This matchups sideboarding plan is one that I am not extremely comfortable with. There is a lot of stuff I would like to add, Duress being one of the cards I would want to bring in against their Seasons Past plan, but I am not entirely sure where I would make the cuts. The matchup feels really good, as we have a lot of great cards against them, and they are extremely limited in what they can do about Demonic Pact. Sometimes less is more.

GR Ramp is the last of the top eight lists we will be looking at. Infinite Obliteration shines here! Emrakul is of course the most relevant card, but World Breaker can be a bit of a pest as well. Our Transgress the Minds are outstanding here as they hit their planeswalkers, seven of their eleven creatures, and eleven of their spells. Kozilek’s Return and Fiery Impulse do very little against us!

Our board plan makes our deck stronger in the matchup I do believe. They should be bringing in Goblin Dark-Dwellers, Tireless Trackers, World Breaker and maybe Dragonlord as another threat. We’re ok with that.

We’re taking out our mass removal, which might be a little dicey, but we still have plenty of answers to their early threats. Duress keeps them off the ramp plan, and Obliteration gets their giant monsters. Ruinous Path is just another early answer.

Moving on to the 9 win decks. UR Fevered Visions is up first.

This deck is scary. It’s also really good. Finally it has a sideboard that looks like it was plucked out of a binder last minute. This is a burn deck at its core, and it has no issues finding gas thanks to Fevered Visions and Collective Defiance.

This is what I have been sideboarding in the matchup

Hitting Thermo-Alchemist is the most ideal with Infinite Obliteration. The extra damage that it deals adds up quickly! Cutting Read the Bones is hard, but I do not want to give them a free Shock. Duress controls their burn and counter magic, and while we are keeping in Grasp and Path, the Murder is a concession to the possibility of Goldnight Castigator. Be mindful of their Visions, and if you can discard the full amount of cards to Brutality, do so, to keep your hand size small under Visions.

From here out, I am going to list the sideboarding suggestions for the matchups.

It’s time for the lightning round!

The plan is to kill everything and rely on Chandra and Dark-Dwellers to pick up the win. Surviving until turn 4 to cast Languish is the most important thing we can do. Again, Read the Bones comes out because I do not want to give away life.

In: 1 Chandra
Out: Tendrils

Again the matchup just naturally feels good, and they do not have Conclave Naturalists for the combo.

Distended Mindbender has the potential to be backbreaking against us. I like bringing in Infinite Obliteration to deal with Haunted Dead, Prized Amalgam and Relentless Dead. Flaying Tendrils kills everything but Amalgam and Volaren Pariah. We want to keep Transgress to possibly exile Amalgam, Pariah and Mindbender.

I have never played this matchup. I’m not entirely sure what to do here.

Languish feels considerably better in this matchup than it does in the Temur matchup. Obliteration should name Amalgam, and as long as they do not explode and chain Elder Deep-Fiends you should be okay.

That wraps up the PT Gauntlet, let’s check what are missing on Goldfish in our lightning round.

UW Spirits
In: To the Slaughter, Chandras
Out: Infinite Obliteration, 2 Transgress the Mind

These were the decks of note that I was missing.

Hopefully this sideboard guide will help you out! As for me, I am going to go kill more demons.

Or maybe sleep. It’s a real toss up right now!

Thanks for putting up with me!