Cursecatcher IS 9 DOLLARS TCG MID?! This seems insane to me, but going beyond that, its a good idea to start trading back into Modern staples if you can before they follow suit. Dealer buy prices are starting to rise and places like TCG haven’t caught up yet so there is money to be made.

1. True-Name Nemesis is a pretty good magic card and was the big storyline throughout GP DC last weekend. Its success and notoriety has helped push the card to ~$45 TCG Mid which is absurd. Sell them, trade them, get out now, more Commander decks will be out for the Holidays and this card is already more than Scavenging Ooze was before the reprint.

2. I really like Toxic Deluge, I think its underappreciated and is at the very least a trade target if not an outright buy. Its probably the best ‘answer’ (Emrakul, the Aeons Torn doesn’t count) to True-Name Nemesis in Legacy right now considering how bad edict effects are against Delver of Secrets decks or Elves. I know I already said more Commander decks would be printed, but that hurts a $14 card much less than a $45 one when the decks MSRP at $30. I expect Deluge will have a breakout weekend at one of the Legacy Opens sometime soon and we’ll see the first of possibly several jumps then depending on how long Commander 2013 is available.

3. Chandra, Pyromaster is almost half of its high a few months ago. She isn’t seeing much play outside of the Red Nykthos, Shrine to Nyx decks and that’s likely to change soon. People are playing X/1s like Firefist Striker and Soldier of the Pantheon again which makes Chandra significantly better because her +1 is much more likely to actually do something which makes her less of a wasted turn early in the game and should help her see more play. I’m not sure we’re going to see $35 again in the near future, but I wouldn’t be surprised if the card hit $30 after a decent showing at GP Albuquerque or one of the next few Standard Opens.

Low end Theros staples are going to be hitting their floor within the next few weeks if they haven’t already and I’m not sure what to do about it. We went over my issues last time about buying into RTR block cards, and while M14 remains the best set to target as a whole, the question of what to do with Theros is looming over us because we are running short on time to finish making inventory and bank roll decisions for the coming season.

The logical first step in making this decision is to see what happened last year when we had two big sets that were both their own draft formats leading up to the Standard ptq season. Unfortunately RTR was released 6 months before Standard PTQs started while Gatecrash was only 2 months, and Theros will be in between them at 4 months meaning the comparisons will not be perfect.

To be honest, I’m not sure how relevant Gatecrash will be because its release was too close to the start of the season and any uptick in demand was overwhelmed by the new set price tank we see with every release. 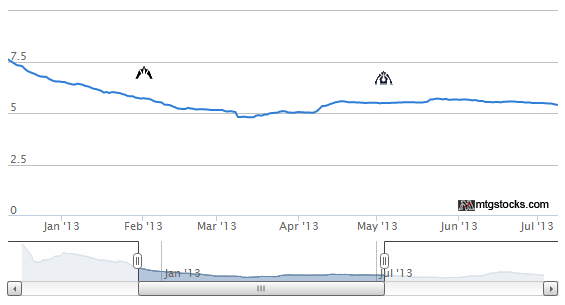 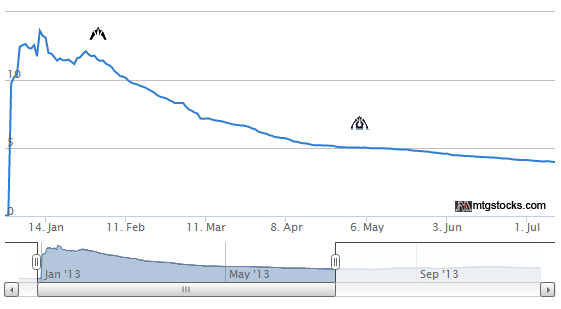 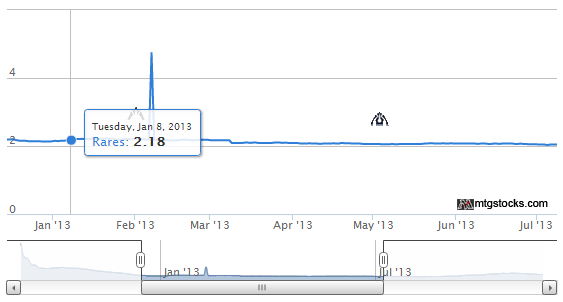 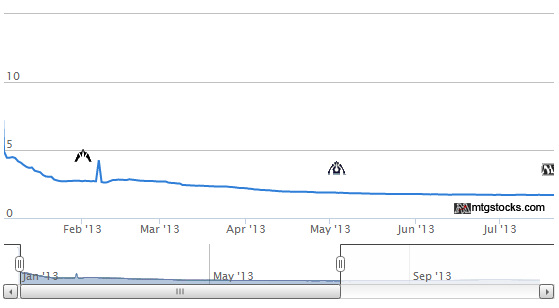 There’s a jump in the price of RTR mythics but other than that we see nothing other than GTC declining. However, I don’t think the data tells the story well in this case, RTR bulk mythics/ rares had already tanked at that point so the average price moving at all during PTQ season is quite significant considering how much dead weight cards like Sphinx’s Revelation had to carry in order to make the average price move at all. Lets take a look at a few RTR Standard staples to get an idea of how the set performed once the chaff is cleared away. 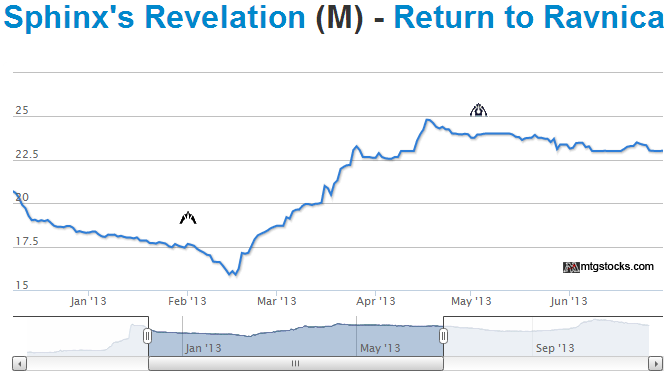 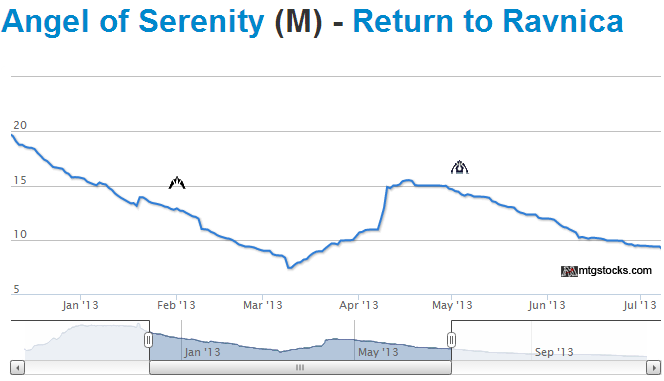 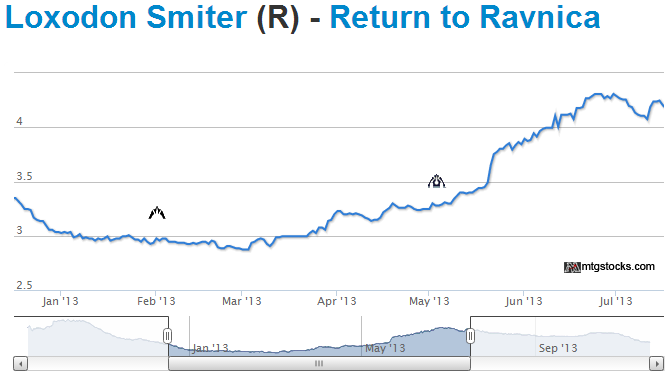 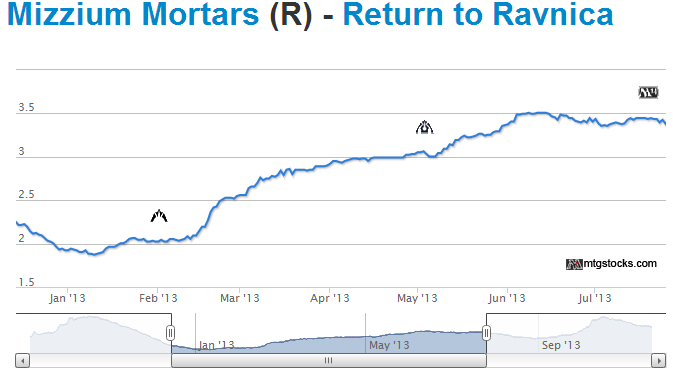 The RTR data gives me a very positive outlook on all the cheap copies of cards like Anger of the Gods, Fleecemane Lion, and Thoughtseize that are starting to come into the market as more and more packs are opened.

However I have some concerns, I think GTC serves as a warning to us, because despite last years Standard ptq season all the set did was tank until rotation. While I don’t think that will be the case because it looks like Theros is settling before the season actually starts, its still a possibility, and even if the set does not tank, there may be a lower ceiling because the season is closer to the sets release date than it was with RTR and will still be drafted during the season. These concerns are exacerbated with the issues the Magic Online market is facing, and the possibility of a (larger than usual) flood of set redemptions hitting the market is very real.

These issues make me hesitant to commit cash to Theros stock quite yet and may mean I don’t at all, but I don’t have a problem trading into staples with RTR block cards as there is certainly more room for growth in Theros especially in the long term.