1. Restoration Angel is $5 TCG Mid. You should own more of this card. While fellow Innistrad block staples Geist of Saint Traft and Snapcaster Mage have higher ceilings, they also cost three to four times as much respectively. With a touch of casual appeal and reasonably broad demand within Modern (between various Birthing Pod and Celestial Colonnade decks) I think Resto could hit $12 during Modern season and at minimum will be buylisting for its current Mid price come June.

2. Scavenging Ooze and Witchstalker feel underplayed and undervalued. Ooze is a multiformat staple that should only get better as the format grows due to its versatility and can be found under $10 which seems crazy to me given where it was during the summer. We saw a Wolf sighting in the Top 8 of GP Santiago from Matias Soler’s G/R Monsters list which makes sense given the amount of targeted removal being played out of Esper and Mono Black. I think the Wolf is better than that however, acting as a more difficult to kill Loxodon Smiter with upside in a lot of matchups (barring Anger of the Gods of course), the Wolf is less than $3 TCG Mid which feels like a steal.

3. The aggro decks are back! Ajani, Caller of the Pride and Exava, Rakdos Blood Witch helped power two near monocolored aggressive strategies to an SCG Open Finals and GP Top 8 respectively. While I think both these cards have reasonable upside due to their relative low prices they’re both going to be hamstrung by additional printings, and its important to remember that their ceilings are limited.

4. The pricing discrepancy betweenNightveil Specter and Boros Reckoner has driven me nuts for weeks now ($9 to $17 TCG Mid).The buy-a-box promo was not enough to justify that kind of difference given that Specter was everywhere and we’d hardly seen Reckoner outside of Red Devotion decks. Unfortunately now it looks like people are going to start attacking for two again which will help prop up Reckoner’s price and ruin the rant I had planned. However, people playing armies of fancy Savannah Lions may have far reaching consequences beyond ruining my fun. Have you ever cast online slots Hero’s Downfall on a Rakdos Cackler or Soldier of the Pantheon? It feels horrible. Downfall’s price is only sustainable if its played as a three or four of in multiple tier one strategies which I don’t see happening if people start trying to get their beatdown on again. It looks like we’re headed towards something similar to the opening weeks of the format where cards like Downfall and Specter weren”t efficient enough to see widespread play and their prices should be dropping in the near future.

MTGO redemptions are coming this month. It remains to be seen how the increase in cost will affect the amount of sets redeemed overall but regardless of the exact numbers a secondary supply of Theros singles is going to be available which will drive prices down. Take a look at what happened to the average price of cards in Return to Ravnica last fall. 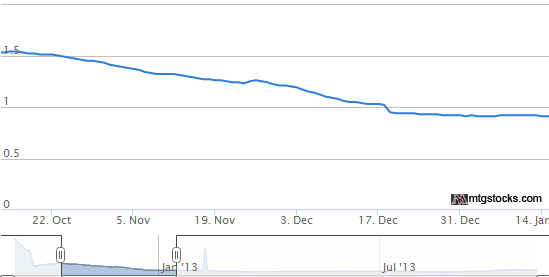 If we look longer term, after the initial drop there is little movement until Innistrad’s rotation last October which made the optimal buy period for RTR late summer or early fall.
Average Mythic Return to Ravnica Mythic price.

This year is different due to the reshuffling of the PTQ schedule because of the addition of a fourth Pro Tour. The impending Standard PTQ season this winter gives us a potential opportunity to take an aggressive Theros position earlier than usual (December), and cash out during Standard season with the option to re-buy over the summer after Modern season is over.

Normally during Standard season most cards from the current block see little movement, (as we can see in the charts above), instead, most of the value gained is in the previous block and the Core set. While I doubt M14 or RTR block cards are going to be a bust this winter, they’ve already seen significant price increases and I question how much margin is left at the current values.

Previously the gap between the fall price bump and Standard season gave time for demand and subsequently prices to drop as the competitive community focused on other things (like Modern), which created buying opportunities for people who were looking ahead. However, the current schedule does not have this gap and there will likely be little to no drop in the price of RTR block and M14 cards before the PTQ season starts. This begs the question of where to put our money in the interim and will likely have us looking to price suppressed Theros over the next couple months (and M14 staples that haven’t seen the price bump yet, like Scavenging Ooze).

We’ll see how far the market allows Theros to fall this year before artificial demand produces a price floor on various staples (particularly cards like Stormbreath Dragon and Thoughtseize). While unexciting, I can’t recommend anything beyond being patient and paying attention because opportunities are likely to be short lived in the immediate future.