Hailing from Goblinville, IN, Ryan AKA the Goblin King has been brewing Standard decks since Kaladesh block. Ryan has only one goal as a competitive Magic player and that’s to participate in a pro tour where every participant brings with them only the finest in jank.

Magic the Gathering is set to release its first ever Fairy Tale inspired set and as spoiler season draws to a close, there is quite a bit to unravel as we find ourselves crawling down a rabbit hole into a world that is filled to the brim with tales as old as time. Laid on thick and smothered in candy-covered food token goodness- there is a charm to Eldraine that has been undeniable since the very first spoiler art, eventually found on the card “Into The Story” by Jason Rainville was unveiled to us over a month ago: Adventures were the first novel mechanic relayed and they offer a lot in terms of enriching the gameplay experience. But, first let’s take a moment to look at these sweet new borders that AD Cynthia Shepard helped develop: 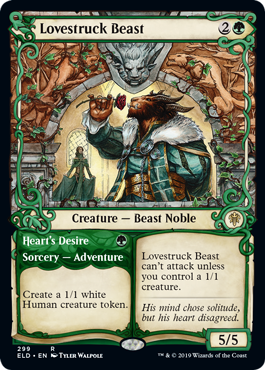 (Fun Fact: This is the first set where the word ‘love’ appears in the title of a Magic card- Lovestruck Beast and True Love’s Kiss)

Similar to the aftermath cards that were printed in a somewhat recent expansion in Amonkhet (although a bit more flexible) these sorts of two-for-one effects essentially give us insurance from mana flood. Anyone that’s ever been hellbent with an Aggro deck only to draw three lands knows the dredges of unfortunate RNG and adventure cards will help alleviate this. One card now, one card later. Neither of which is a land. Praise Judith. It’s the way that these cards dance around with our favorite fairy tale tropes that really brings the charm of Eldraine home to roost. Heart’s Desire is the left part of the card (which you can only play before the second part, not after) and it makes a 1/1 human token. The flip side of the adventure once the initial ‘quest’ of making a token is completed is to create a 5/5 noble beast that can only attack if there is a 1/1 that you control. So in essence, there is no beast without the beauty.

As we meandered further down the rabbit hole we came across a concept that was more confectionery then card game- the much quibbled about food tokens. As it turns out, food tokens are the Eldraine equivalent of Energy- basically a usable resource that is accumulated by your creatures and which can be used by different creatures in a variety of ways (say to make mana or add a counter). The one caveat with food tokens, however, is that they can be sac’ed for 2 mana in a pinch to gain you 3 life which will add a depth of complexity to any limited formats even if food tokens don’t quite make it there in constructed (although I’m sure at least a few will make a splash).

As I pore over the richness of each individual card, I can’t help but be taken aback by the shear density of tropes that are touched upon in this set. On one set of cards you’ve got your light hearted children’s classics fairy-tales in Hansel and Gretel, The Big Bad Wolff, and Rapunzel. Alongside these are Grimm’s horrors and re-imagined Grimm’s style depictions of popular fairy-tales that take on a much more sinister tone: 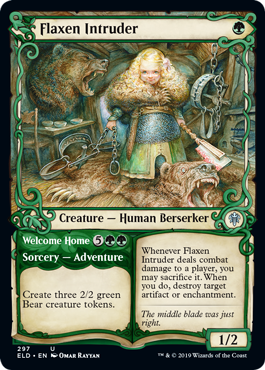 But the cards don’t shy away from humor, however, as we see our fair maiden Rapunzel tells us “at least up here I have some peace and quiet”. With this statement I’m less expecting a knightly hero to save her from her predicament and I’m instead expecting that idiot knight in the painting from Harry Potter to show up, offer to save her, and instead be rejected. That’s the charm that this set emits- that I’m expecting a character from a completely different world to show up… and not save they day. 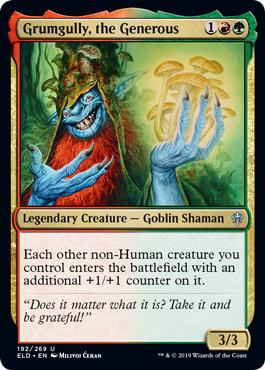 Glumgully speaks to me. In a lot of ways this small goblin man speaks to me. For starters, he offers a riddle “How was this ever printed”. But second, he asks us why not? Why not take the pink pill? Why not go on that adventure? Why not find yourself outside (yep, I said it) outside living the sort of existence where you find yourself in a real life fairy-tale with a real life goblin man handing you a bunch of glowing mushrooms and telling you to just eat it. Of course you eat it. Of course you go on that trip. Glumgully, wherever you wanna go- I’m with you buddy. 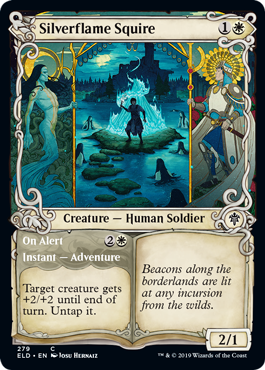 I really like Eldraine- it’s not quite, but it’s close to everything I wanted it to be. Eldraine reminds me of my childhood. It reminds me of those times where my parents would read Harry Potter stories to us before we went to bed. It reminds me of The Harry Scary Monster at our Grandparents place. The art evokes memories of running around by the creek next to our Aunt and Uncles house. Eldraine reminds me of the Knights that say knee, I don’t remember the movie, I just remember dumb knights and us huddled around the TV at the house. But most importantly, Eldraine is to me, a world full of hope. The type of place where anything can (and does) happen; the sort of world where there is Magic in every nook, cranny, and crevice of its being.