With Standard being pretty much over at this point, and Modern season winding down, Kaladesh is the big flash point for competitive grinders.  A lot of us have put Constructed on the backburner as the reasons to play each format have dwindled since Eldritch Moon’s release.  However, Kaladesh itself serves to be no flash in the pan for either format.  Standard will obviously see new decks and old decks with new cards, while the enemy fastlands are enough to shake up Modern. The news of Concealed Courtyard, Inspiring Vantage, Spirebluff Canal, Botanical Sanctum, and Blooming Marsh being added to the Modern card pool is a big one.  Especially with Abzan on the rise.  One of the key reasons a lot of Jund players and maybe even Modern players have stated that Jund was more popular than Abzan over the years was that Blackcleave Cliffs was just a house.  Being able to cast an Inquisition of Kozilek on turn one followed by mana enough to Lightning Bolt on turn two without taking a single point of damage is a big game.

However, Abzan now has the power to do this.  A turn one Concealed Courtyard allows the Abzan player to play with parity against the faster decks in the format without taking damage to Path to Exile after they cast a discard spell.  Then are able to then follow up with a Forest for Grim Flayer, and start rampaging their way through Modern the way Jund used to.

The other obvious point to make about Modern and these new fastlands is that the Izzet decks get a bit better also.  Spirebluff Canal, I can imagine, only makes their aggressive matchups better, since now, like their BG/x counterparts, they can cast their turn 1 spell, Serum Visions in the case of Grixis, Temur, and Jeskai decks, followed by Lightning Bolt.  I absolutely am sure that Temur and Grixis want this.  The Jury is still out though on Jeskai, as they have been able to Serum Visions and Path off of Seachrome Coast already.  Only time will tell.

Burn itself gets better also with the inclusion of Inspiring Vantage.  A lot of games, the Burn player starts on 14 life after fetching and shocking for both a Stomping Ground and Sacred Foundry.  This could be either to make their Wild Nacatls 3/3 or to be able to cast both Boros Charm and Atarka’s Command or whatever silly sideboard cards they decide playing in their 75 that day.  However, a lot of lists currently run a Copperline Gorge.  I would imagine that Inspiring Vantage is better for Burn in general, since they can just play the R/W version of the deck without the Green, which fades in and out, and that deck doesn’t care about having a Plains specifically for Nacatl.  This makes the Inspiring Vantage pretty stellar.

The other two are a little lackluster in my opinion, at least at this point.  They may see play in fringe decks, specifically I’m thinking of the Eldritch Evolution decks that haven’t really settled on a build yet, as we’ve seen Temur, Abzan, and 4 and 5 color versions of the deck.  The Botanical Sanctum may see play in some Abzan Melira Combo decks, but other than that, the foreseeable future doesn’t hold anything special for the others.

Aside from the big announcement of the enemy colored fastlands coming soon to a booster box near you, there was big news on the planeswalker front for this set, and even this block.  First, people with their thumb on the pulse of Kaladesh have known for a while that Saheeli Rai would be the flagship planeswalker of the set, the sort of main character, given all of the promotional material with her face on it.  Well, we have her: I would say that as far as three mana planeswalkers go, other than your typical Liliana on three, this is pretty much on par with what we would expect.  She comes in at three loyalty, which is about average.  She provides card selection with her plus, and a neat copy ability with her minus.  A lot of things I’ve seen other people trying is her in a deck with creatures or artifacts that have come into play abilities.  That’s fine, and certainly not a poor place to try and fit her in, but I’m looking at the easier, more obvious solution.

There is already a U/R deck in Standard, the one feature Fevered Visions and Thermo-Alchemist.  With so many ways existing in the format for almost every color to play around Fevered Visions, Saheeli could slot well into that deck.  A lot of people are down on this card, given she doesn’t protect herself.  Well, if your deck is full of cards that either kill opposing threats, like Lightning Axe and other burn spells, or creatures with high toughness and low converted mana costs that block pretty well, like Thing in the Ice or Thermo-Alchemist, does it really matter that much if your planeswalker protects itself?

Saheeli gives this deck a lot of what it needs.  Drawing cards with Fevered Visions is great, sure, but it’s symmetrical, and when your opponent is playing Noose Constrictor or Call the Bloodline, that effect is really poor.  Saheeli, while not drawing cards, gives you the information on your main phase, so it lets you plan your turn according to the card you are going to (or aren’t going to) draw from the scry, while advancing your game plan of burning your opponent, or keeping an opposing Liliana, the Last Hope from advancing toward an ultimate.

Also, even though the deck doesn’t have too many creatures in it, the ones it has are very good in the deck.  Imagine making a hasty Thermo-Alchemist the turn you go off and play three or four spells?  That’s an extra four damage, which could be game ending, not to mention a possible second 7/8 Awoken Horror swinging for a ton of damage.  While she’s not game ending, as no three mana planeswalker should be, Saheeli Rai certainly will have a home in Standard, and I’m looking forward to it.

Next, we have a new Nissa. 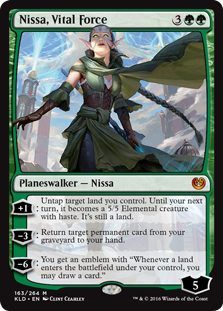 Now, I’ve heard very mixed things about this card, and I’m not quite sure where I stand.  I’ve had the pleasure of playing a deck with Tireless Tracker and Nissa, Vastwood Seer in Standard for the past three Standard seasons.  Being able to draw a card off of your land drops is really sweet, even though Nissa, Sage Animist kind of worked the opposite way this card did.  But plussing this Nissa and busting her doesn’t seem like the right thing to do most of the time.

Honestly I think this card may be overcosted.  I look at how much play Ob Nixilis Reignited has caught in the past few Standards, and you were bold to have played him as more than a one-of.  Nissa, Vital Force is a sort of green analog to Ob Nixilis, which could have a better -3 depending on how much self-milling for Emrakul, the Promised End is still going after Kaladesh forces Standard to rotate.

However, she is certainly able to defend herself the turn she comes down, which makes busting her very likely the following turn, especially if you’re at parity, so her -6 might be just what you need.  Another thing too, is if you have multiple of these in your deck, you do get to make the emblem, cast the other Nissa, and minus to get the first Nissa back.

Anyway, I’m much more medium on this card than I am on Saheeli Rai.  I’ve already been yelled at by my friends and testing partners for ranking this one so low, but honestly for five mana, I’m looking to take the game over in a sort of way Ob Nixilis Reignited does, with both board control and card advantage.  While Nissa, Vital Force could force games to end, I don’t think she is as powerful as Ob Nixilis, but she may be what certain Emerge or Delirium strategies are looking for.

Now, onto the last planeswalker of the set.  Chandra, the Mind Sculpt…wait a minute. Move over wife, daddy’s got a new girlfriend.  Card is straight busted, instant $50 Standard all-star must have ten outta ten ultra nuts.  First, four cost Chandras have almost always seen at least fringe play, especially in standard.  The exile and cast mode on this card is strictly better than Chandra, Pyromaster.  It works toward Chandras ult here, and if you don’t want to play the card, you still get value out of it.  Amazing already.

Her other plus, getting RR, is still really good in a format with Tormenting Voice, Lightning Axe into Fiery Temper, and other sweet two mana plays.  And that’s if you play this sweetheart on the fourth turn with no other mana available.  Also untapping with seven available mana on turn five with this card is probably going to be busted?  Especially if you can shove a ton of card types into your graveyard, and reduce Emrakul, the Promised End’s cost to seven.  Heck, on turn five, you can cast a Pilgrim’s Eye, and still Emerge an Eldrazi!  I think this is the ability that is underrated on this card.  Chandra is essentially a red Explosive Vegetation, but the lands come into play untapped, and if you don’t need the mana, you can draw a card, or…

Minus her to deal 4 damage to a creature.  This isn’t amazing, as 4 damage is probably really only good until turn six these days, but still, being able to come down and kill almost any creature that may be in play on turn four is pretty good.  This is just a standard control mode, which most busted planeswalkers seem to have.

Also there’s a fourth ability, if you even want one.  Making an emblem that can end the game in a single turn is pretty good.  Sort of like a Jace, Telepath Unbound emblem, but can deal damage to the board, hits a lot harder, requires fewer spells to cast to win, and is on just a better creature.  Also it doesn’t take as long to get to.

Anyway, super excited about this card.  Best card in the set.  She’ll be battling Gideon, Ally of Zendikar for the next six months though, as I think he’s a great way to combat her.

And finally, as far as planeswalker news goes up until this point, we have the flavor text of the new card, Larger Than Life. “They say Head Judge Tezzeret will be reviewing every invention at the Fair.  I made sure to build something that will stand out.” -Jehvani, Vahadar artificer

I don’t care who Jehvani is, but the fact that the next block is going to have Nicol Bolas in it, and this block is going to have Tezzeret most likely making an appearance should excite you lore enthusiasts.  As for me, I’m excited to play busted artifacts with Tezzeret, since I never had a chance to when either version of him was in Standard before.

That’s it for this week.  Looking forward to more great card reveals in the days to come, working up to the Kaladesh prerelease!