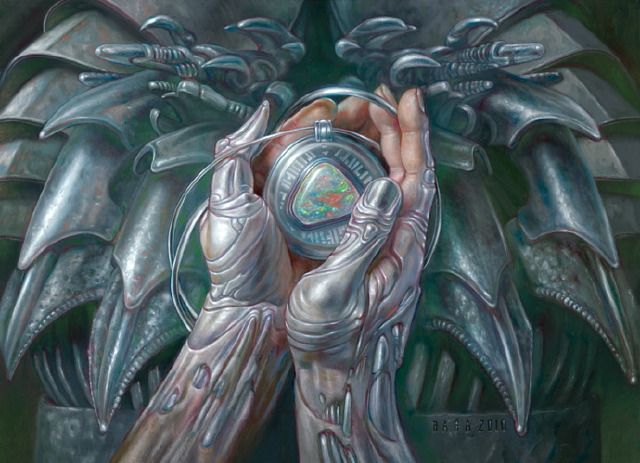 Hello everyone. Welcome back to Legit MTG. I hope you all haven’t missed me too much while I was away. Today I want to talk about a certain archetype that I miss in Modern, and some options if you still have your cards from that deck which is no longer with us. While it has been some time since the key card was banned some of us Modern players do miss having this as an option to sleeve up. I also think the deck would be perfectly reasonable in the current meta. Today I’m going to talk about Affinity.

Before we dig into its Modern history let’s first take a look back at the two times in Standard an artifact based aggro deck was at the top tables.

To know the early days of Affinity we need to look at it’s entry into Standard. In the fall of 2003 Wizards of the Coast released its 30th expansion in Mirrodin. Following up the frame redesign that debuted with that year’s Core Set 8th Edition Mirrodin provided a heavily artifact themed set, followed up by Darksteel and Fifth Dawn, all set on a world called Mirrodin. Mixing organic and metal it provided players a unique feel to the game beyond the battles that had been raging on Dominaria for many sets, and a new card type in Equipment. The set even featured cards to entice longtime players to buy into the set with Icy Manipulator, Atog, Chrome Mox, and Gilded Lotus. However while all of those cards may have been fine it was one keyword that struck fear into the hearts of all players: Affinity.

Spells with Affinity had their cost reduced equal to the number of artifacts you had in play. Coupled with the cycle of artifact lands, and decks built around the keyword became problematic pretty quickly. Although powerful it wasn’t until the second expansion in Darksteel where Affinity entered beast mode. Providing the deck Arcbound Ravager, Arcbound Worker, and Skullclamp allowed it to abuse the Modular mechanic that premiered in Darksteel. This caused the banning of several cards in Standard for the first time in several years, but not before Affinity won several tournaments.

Here is an example Affinity list from that era.

Having a hyper-aggro approach this deck tried to go as fast as humanly possible. Using Chrome Mox to power out spells early, and Shrapnel Blast to finish off opponents this deck was so fast it was difficult to beat. The Modular mechanic also made it challenging to remove a creature via spot removal, and having a Disciple of the Vault on the board with either an Arcbound Ravager, or Atog, meant you would still lose life from a Wrath of God. All of this happened while Skullclamp and Thirst for Knowledge kept your hand full, and with the low land count most of the cards in your hand were spells. To this day many players who survived this era do not speak highly of it, and it is often used as a signpost to show what happens when artifacts dominate a metagame.

In the fall of 2011, only 7 year after leaving Mirrodin, we returned to Mirrodin with the set Scars of Mirrodin. Portraying a story through its companion expansions Mirrodin Besieged, and New Phyrexia showing the Phyrexians conquering the plane we had another artifact themed set. Unlike its predecessor we did not have the Affinity keyword. This time we had the keyword Metalcraft that rewarded you for having three of more artifacts in play.

While Mox Opal was the standout card in these builds another addition was having a 1/1 for 0 mana. Memenite not only provided a free creature that can deal damage on turn 1, but after you have Tempered Steel in play you had a free 3/3 instead. That’s quite an upgrade. Couple that with Galvanic Blast, and this deck could dish out a lot of damage in the early games. You even had a backup plan with Inkmoth Nexus, which had the keyword Infect (which felt like a merging of the keywords Poison and Wither).

Something of note with this era is that Tempered Steel decks were still performing well even in the face of the most popular Standard deck in the last decade: Caw Blade. Not bad for a bunch of artifacts in one deck.

Shortly after the Scars of Mirrodin, and it’s companion expansions left Standard a new format was introduced: Modern. Taking the place of (the failing) Extended format Modern was made to allow players to use their cards that have left Standard, but may not be to the power level of Legacy. While Modern had a long list of cards banned upon the creation of the format (which they added to within a month of tournament play after) the cards players had from their Standard Tempered Steel deck were still intact. From there players looked at other cards outside of that Standard era to help add to their deck, and see if it was viable for this new format. Sure enough there were plenty of artifact creatures that fit the bill. Here’s an example of how the deck last looked.

The power of Mox Opal, and the Metalcraft mechanic really started to shine in Modern. Being able to obtain Metalcraft on turn 1, thanks to Darksteel Citadel being the only artifact land legal in the format, really pushed this deck to be the premiere aggro deck. While not playing any cards with the Affinity keyword (although occasionally decks would play Thoughtcast) many of the holdovers from that deck, such as Arcbound Ravager, would find a home here bringing the name of the deck with it.

From the creation of the format until the banning of Mox Opal in January of 2020 Affinity, along with Tron, and Burn, was one of the pillars of Modern. An entry point for many players, and a deck that did not require dual lands nor fetchlands. Sadly though due to new decks, and cards (looking at you Urza, Lord High Artificer) Mox Opal is no longer with us.

So where does that leave us now? Can we still play a Robots based strategy? Will it be too slow? What formats would it be best in?

Always Hope, There Is

Why yes Virginia YOU CAN play with cards like Arcbound Ravager, and Steel Overseer, and still not have to have fetchlands in your deck! A deck that used to run Mox Opal has appeared in many Modern leagues as a viable option this year, and while it doesn’t have the speed it once had you’ll still need plenty of six sided dice when playing this deck. Let’s take a look at Hardened Scales.

The key to the deck is the namesake card: Hardened Scales. Having this in play increases the +1/+1 counters that are placed on your creatures, and you want to have many ways to do that. This is where cards like Steel Overseer come into play. Having a deck full of artifact creatures provides a lot of counters across your army. The new card The Ozolith can also store counters when a creature dies, and put them on a creature before combat. If you have Hardened Scales in play those counters increase. Imagine loading up an Inkmoth Nexus, and attacking for a lot of Infect damage. Remember the Modular keyword from earlier in this article. Arcbound Ravager and Arcbound Worker are here representing that bygone era, and using the synergy with Hardened Scales to increase the power output of your deck. Don’t sleep on cards like Hangarback Walker, and Walking Ballista. These creatures are hard to remove, and provide a lot of value for a very small cost. While this is great for Modern where else can you play some of these cards?

A Pioneer Of A New Format

Nearly a year ago a brand new format was made to, you guessed it, allow players to play their Standard cards that may not be good enough for Modern (but honestly a lot of cards printed in the last 5 years are good enough for Modern). This format, named Pioneer, allows players to explore deck building using the cards from Return to Ravnica through the current set in Standard (as of this writing Core Set 2021).

While you lose out on expansions such as the ones starting with Mirrodin, and Scars of Mirrodin, there are still a smattering of cards throughout Pioneer to assemble a deck. Let’s take a look.

Unlike the Hardened Scales deck in Modern this Izzet Ensoul deck does not try to go wide. Its focus is on making very large attackers, and doing as much combat damage in as few turns as possible. Familiar cards such as  Darksteel Citadel, Ornithopter, Shrapnel Blast, and Steel Overseer are in this deck providing a good base to build from if you have kept those cards since they were first in Standard. Two newer cards though are the lynchpin of this deck: Ensoul Artifact and Skilled Animator.

Ensoul Artifact is an enchantment that turns your artifact, creature or non-creature, into a creature with base power and toughness 5/5. Skilled Animator does a similar trick, but instead of enchanting the artifact it stays on the board as an additional creature, and just turns the target into an artifact creature with based power and toughness 5/5. The key word here is: base. If you have a Stonecoil Serpent in play or an Ornithopter with a few counters, those counters apply after the effect changing the base power and toughness resolves. So enchanting an Ornithopter with 2 counters on it turns it into a 5/7. That’s going to be very hard to block.

It is fortunate this deck has a lot of creatures as the format is very aggro based so expect a lot of removal. This is why Darksteel Citadel is a prime target for Ensoul Artifact as it’s indestructible.

That’s a lot of decks to go through, but this is where we are with artifact aggro in Magic right now. While I would think bringing Mox Opal back to Modern would be fine currently there are options, and even a new format, where you can play artifact aggro without it. You still have to watch out for cards that attack your strategy such as Stony Silence and Karn, the Great Creator though. Prepare accordingly.

While cards being banned can derail a deck, especially one you have had built for a long time, know that there are always new cards being added and your cards may find a new home again. Magic: the Gathering is a game that at its core is always changing, and evolving. Sometimes that comes at a cost that’s more than the price of the singles we buy. However with some time, patience, and a few new releases we may find something we enjoy playing again.

It’s that time again. A new set is on the horizon, and that means more cards to try in your decks. Stay tuned for my Zendikar Rising reviewing.