Tyler has been playing TCGs for nearly 20 years. A long brewer with a knack for Legacy, there's nothing he loves more than making crazy decks a reality

Welp, here we are. In my last primer I asked you which deck you wanted to see next, and you overwhelmingly voted for Doomsday. For you masochists out there, I hope you’re happy.

Doomsday is, beyond a shadow of a doubt, the most complicated deck in Legacy. It may even be the most complicated deck in all of Magic. It’s a deck made for only the maddest of Magic players, with hundreds of possible configurations and exponentially more lines of play. For the purpose of brevity, I’ll be covering the three most popular non-Storm builds: Laboratory Maniac, Shelldock Isle, and DDFT.

SLOW DOWN, WHY DO PEOPLE BUILD AROUND THIS CARD?

The biggest reason people play Doomsday decks is because of a chemical imbalance in the brain that causes mental illness, which is probably why alongside Dredge and Oops All Spells it’s one of my favourite decks to goldfish. After that, the main reason is that Doomsday decks play like intricate puzzles for you to solve. It’s the Extreme-level Sudoku of Magic. It’s the 10,000 piece jigsaw puzzle that’s 60% sky. It’s incredibly skill-testing, equally rewarding, and most importantly it’s crazy fun to play.

SO WHAT DOES THE DECK ACTUALLY DO?

The core of the archetype, Doomsday, allows you to search your deck and graveyard for any five cards and exile the rest. Then you get to put those five cards on top of your deck in any configuration you want. With these five cards you should be able to win the game through whatever combo you feel like running. To back this up, non-Storm Doomsday variants typically run a suite of 10-12 counterspells to stall for time and force through your combo.

YOU’VE GOT MY ATTENTION. WHAT’S THE MOST COMMON VERSION OF THE DECK?

If you’re going to see a non-Storm Doomsday deck, it will most likely be the Meandeck Doomsday deck popularized by Steve Menendian.

What this build wants to do is resolve a Sensei’s Divining Top, then cast Doomsday with plenty of countermagic in hand. While the order of the pile is often specific to the context of the game, from my experience the pile usually goes (from top to bottom): Brainstorm, Mental Note, Laboratory Maniac, any card, Unearth. What this allows you to do is Brainstorm into Mental Note, Lab Maniac, and the extra card, putting Maniac and the extra on top of your deck. You then cast Mental Note to put the extra and the Lab Maniac in the graveyard, drawing Unearth. You cast Unearth to put Lab Maniac on the battlefield, then draw a card, either by a cantrip or activating your Top to win from Laboratory Maniac’s ability.

This is one of the more straightforward builds of Doomsday, and for players looking to get into the archetype, this is the build I recommend practicing with. This version is not without its weaknesses, of course. Graveyard hate really preys on this build, and while countermagic can help mitigate this, you only have so many counters to work with. An early Relic of Progenitus or Tormod’s Crypt sneaking through your counters can be backbreaking due to Blue and Black’s general inability to handle resolved artifacts. As well, cards like Leyline of the Void and Faerie Macabre hose your graveyard while being untargetable by traditional countermagic. For this, the deck tends to run three Chain of Vapor to bounce the permanent-based hate, and while Faerie Macabre is less common, I recommend at least two Stifles because of its versatility. Another option is to run the Shelldock Isle combo in the sideboard to negate your opponent’s graveyard hate altogether. Which brings us to….

Now this a deck that speaks to me. Here the order of the pile is less necessary as your goal is to Brainstorm into Shelldock Isle and Cloud of Faeries. You then play the Shelldock Isle and trigger Hideaway, putting an Emrakul under it. Next, play Cloud of Faeries to untap Shelldock Isle and a Blue source and pass the turn. During your opponent’s turn you can activate the Shelldock Isle and cast Emrakul. Congratulations, you now have two straight turns of attacking with a 15/15. This version also has two backup plans just so you`re not entirely reliant on Doomsday-into-Shelldock Isle. Just in case you’ve drawn one of your Emrakuls, you have four Show and Tells to drop them into play like a regular Sneak and Show deck. Also, if for whatever reason your Shelldock Isle plan does not go off, such as a Wasteland in response to the Cloud of Faeries, the deck runs one Laboratory Maniac to draw and cast after decking yourself.

This variant is slightly slower than its Laboratory Maniac counterpart due to the lack of Rituals, but with its main deck alternate win conditions and being unaffected by graveyard hate cards, I personally enjoy it more. You just have so many different avenues of attacking the opponent that you rarely get stuck against opposing sideboard cards. However, this deck isn’t impervious to everything, and there are still some cards that can interact with your attempts to combo. Stifle, Wasteland, Karakas, and Pithing Needle/Phyrexian Revoker all do a number on your combo, either by stopping the Shelldock from activating or by handling your Emrakul. Running Pithing Needles and Stifles of your own in the sideboard can handle the cards that attack your Shelldock Isle, and your numerous counterspells should be enough to protect you against Stifle and Revoker. Just in case a Pithing Needle slips through the cracks, I also advocate running Chain of Vapor or Echoing Truth.

Of all the Doomsday variants to show up at competitive events, Doomsday-Fetch-Tendrils (DDFT) is certainly the most popular these days. This is also the most complicated deck I’ve ever played. Unlike the previous decks, the piles you make in DDFT are entirely context-specific. There is no one pile that you just always make, and there are entire Excel spreadsheets dedicated to mapping out the different lines you can make.

(picture courtesy of: The Internet) 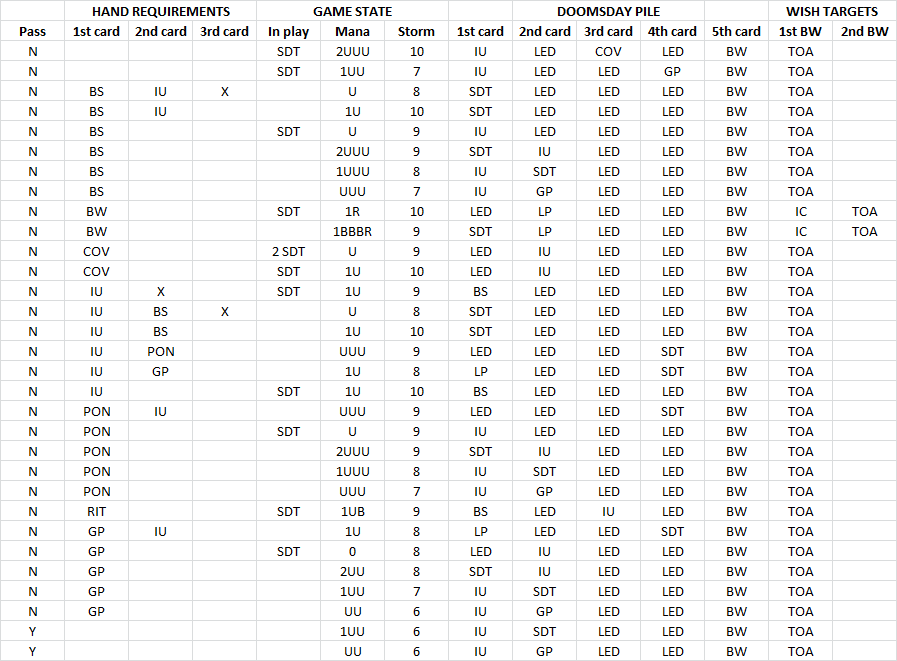 DDFT plays out very much like a regular Storm deck like ANT or TES, but it runs six main deck Doomsdays (3 Doomsday/3 Burning Wish) to set up your combo. What makes this deck unique compared to other Storm decks is that your win conditions are all in your sideboard. The deck still plays all the same Rituals and cantrips as regular Storm, as well as a set of Sensei’s Divining Top to set up your draws and draw a free card once you’ve cast your Doomsday. The deck also protects itself better than other Storm decks due to its seven main deck discard spells. This makes a lot of hate cards that traditionally hurt Storm like Flusterstorm less threatening.

While it does a better job of protecting itself and combing off, DDFT is also much, much slower than ANT. Because there’s no Ad Nauseum, Infernal Tutor, or Past in Flames, DDFT typically lacks the explosiveness to combo off on turn 1-2. DDFT is fairly reliant on hitting Doomsday to get going, and while the Burning Wishes and extra cantrips help, it requires more turns to set up and figure out what your piles are going to look like and how you’re actually going to win.

SO IS THIS DECK JUST UNSTOPPABLE OR WHAT?

Doomsday decks, while very resilient to most hate cards, have one glaring weakness: You have to actually resolve Doomsday before you have a hope of winning. This makes counterspell-heavy decks like Delver and Sneak and Show especially annoying to play against. Meandeck Doomsday is especially hurt by decks like Miracles and Deathblade that run main deck graveyard hate, and both builds are susceptible to Death and Taxes. If you can sneak the Doomsday in against Death and Taxes early enough you should be okay, but as the entire deck is just hate bear lock-down cards, you have a lot of hoops to jump through. Now that Spirit of the Labyrinth has been printed I expect Death and Taxes to welcome it with open arms, and that spells trouble for cantrip-heavy builds like Meandeck. Combo decks like Storm and Dredge are also capable of comboing off faster than Doomsday, so if you have a counter-light hand you might have a difficult time keeping them in check.

DDFT doesn’t have many of the same weaknesses traditional Storm does, but it still has weaknesses. The Hymn to Tourach/Liliana of the Veil decks like Jund and BUG can be particularly oppressive, as they can rip your hand apart before you get a chance to combo. As well, decks with permanent-based Storm hate like Thalia and Ethersworn Canonist can also be brutal to fight. While you have a main deck Chain of Vapors and two Massacre in the sideboard, these two creatures can come down early enough to slow you to the point that you just get beaten to death by 2/2s. Lastly, while seven main deck discard spells are certainly helpful on the play, there are many combo decks like ANT, Dredge, and Oops All Spells that can kill you before you get a second turn. Here you pretty much need to play control for the first few turns by stripping away your opponent’s hand and slow them down long enough to fire off your own combo.

FINAL VERDICT. WHY SHOULD I BUILD THIS DECK?

You should build with Doomsday because of the sheer variety of the deck. Compiling Doomsday piles is some of the most challenging Magic you can play, and a well-versed Doomsday pilot who knows the ins and outs of the deck is incredibly difficult to play against.

As well, it’s important to remember that even though these three variants are the most common, if you have a pet combo you want to run, by all means go for it! Prior to this article I was toying around with the following pile: Predict, Brain Freeze/Grapeshot/Bitter Ordeal, Conjurer’s Bauble, Lion’s Eye Diamond, Second Sunrise. Here you Predict yourself naming your Storm card and draw Bauble and LED. Play them both and sac the LED for three White, crack the Bauble returning nothing, to draw Second Sunrise, then cast it getting back Bauble and LED. Repeat the process, only this time getting back Second Sunrise with the Bauble. You just repeat the loop over and over until you have enough Storm to crack the Bauble returning your Storm card for the kill. There are tens of thousands of possible combinations, and the only hindrance is your imagination.

Doomsday is an incredible engine and an amazingly fun deck to play. It takes a very special type of psychopath to perfectly pilot Doomsday, and if you want to play a deck that challenges you and makes you have to think, this is the deck for you.