It’s one of my favorite times of the year, spoiler season! But not just ANY spoiler season, this one is the spoiler season that will usher in a new Standard format, with Theros block and M15 rotating out, and Battle for Zendikar bringing us all these sweet sweet spells to cast.

Like most people, I want to just keep refreshing the spoiled cards, hoping that the next card that’s delivered to us is the one that breaks the format wide open, or is the next Hangarback Walker, starting at around a nickel and ending up at around $20 on the secondary market.

However, I’m really very bad at building decks. I love finding synergies with new cards and old cards, but really am awful at filling in the rest of the deck list. That being said, I’d like to showcase here a few of the spoiled cards, and throw some ideas your way about what synergies may have been overlooked.

The first card I want to talk about is one that for some reason sticks out to me. With the departure of Lightning Strike, and no real equivalent cheap red removal spell filling the slot in many decks that Lighting Strike was able to fill, I’ve become a really big fan of Smothering Abomination. At first, and by itself, this is obviously not a powerful card. A four-mana flying 4/3 is a reasonable rate, but it has to sacrifice itself at the beginning of your next turn? That doesn’t seem too impressive at first glance. Alone, it reads “2BB, skip your turn, draw a card at the beginning of your next turn’s upkeep.” This is pretty poor, especially when your opponent could just be slamming a Siege Rhino on their fourth turn.

Ok, so what kind of token generation exists in Standard that we can play with? There sure has to be something, and it preferably is something we can do before turn 4, so that we can play our new friend on curve. What was the first card I mentioned in this article?

While Hangarback Walker might be the most exciting card to play alongside a creature like Smothering Abomination, it’s certainly not the only one. Speaking of already-legal Standard cards that are sticking around post rotation, some other cute on-color cards that play nicely with Smothering Abomination include cards like Mardu Ascendancy; Abzan Ascendancy; Liliana, Heretical Healer; and Grim Haruspex.

Mardu Ascendancy makes it so that when you play it on turn two, your two-drop can attack, and essentially draw you a card in a couple of turns. Abzan Ascendancy works much the same way.

Grim Haruspex is cute here just because he adds to the card drawing you get from sacrificing creatures with Smothering Abomination.

There are obviously other token generators that aren’t on color, including Dragon Fodder and Hordeling Outburst, as well as cards like Whirler Rogue and Whisperwood Elemental that already see play, and could possibly fit into builds with Smothering Abomination. 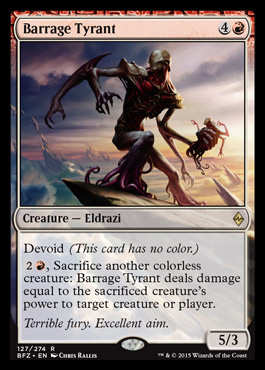 So we can play with a card like this, that gives us the additional benefit of dealing damage while also drawing us cards. For three mana, we can sacrifice some middling creature with a 3, 4, or 5 power, deal that much damage to something, and draw a card. I understand that there’s quite a bit of setup involved here, and we may be getting too cute, but I just want to expose a bunch of angles to sacrificing creatures.

Finally, while speaking of Smothering Abomination, we must look at the new Eldrazi Scion cards. For those that played during the days the first Zendikar block, you may remember the Eldrazi Spawns. These were 0/1 creature tokens that you could sacrifice to add a colorless mana to your mana pool, and they were usually produced by enter-the-battlefield triggers on other cards.

These have somewhat returned, but at a higher power level. We now have instead of Eldrazi Spawns, Eldrazi Scions. The only difference is that the scions are 1/1, which means they are much more threatening than their predecessors. They still have the “Sacrifice this creature: add 1 to your mana pool” ability, so they play especially nicely with Smothering Abomination.

We could play with something like this, for instance:

Brood Butcher
3BG
Creature – Eldrazi Drone
Devoid (This card has no color.)
When Brood Butcher enters the battlefield, put a 1/1 colorless Eldrazi Scion creature token onto the battlefield. It has “Sacrifice this creature: Add 1 to your mana pool.”
BG, Sacrifice a creature: Target creatures get -2/-2 until end of turn.
3/3

Brood Butcher plays in the same realm as Barrage Tyrant, where we get to sacrifice creatures for not only value on one card, but Smothering Abomination allows us to draw a card as well. However, the obvious added benefit to Brood Butcher is that he brings along his little buddy, that we may sacrifice at any moment in order to attain value from Smothering Abomination. It’s these neat interactions that I like to look for in new cards along with old ones.

Finally, still relating to Smothering Abomination, I want to talk about one final card that plays nicely with it, and also comes with cute interactions with cards we already have in Standard. Here is Blight Herder:

Blight Herder
5
Creature – Eldrazi Processor
When you cast Blight Herder, you may put two cards your opponents own from exile into their owners’ graveyards. If you do, put three 1/1 colorless Eldrazi Scion creature tokens onto the battlefield. They have “Sacrifice this creature: Add 1 to your mana pool.”
4/5

So obviously Blight Herder brings the same creatures that Brood Butcher gave us, but there are more of them, and they come at some really strange cost. We have to put cards that our opponent controls from exile into their graveyard. This is definitely a different way to have abilities trigger, and in a world where there is a delve mechanic, and cards like Jace, Telepath Unbound running around, it’s not unreasonable for some of our opponents to have cards in exile, but how can we have this effect be relevant in any matchup? Not everyone is going to have an Abbot of Keral Keep leaving an unplayable card in exile.

The neat interaction that I’d like to mention is with cards like Silkwrap and Suspension Field. These two cards have similar effects, and that effect is that they exile permanents. These are considered cards that an opponent owns in exile for as long as Silkwrap or Suspension Field remain on the battlefield, and we may therefore have those exiled cards sent to their owner’s graveyard in order to trigger Blight Herder. We then don’t even care if Silkwrap or Suspension Field get destroyed, since there is no longer any upside for our opponent for this to happen.

I hope you enjoyed this article, and are excited about all of the new cards that are showing up, as well as finding neat new ways to use these new cards! I’m glued to my internet browser for the coming weeks while the Battle for Zendikar spoiler fleshes out. Come back next week for some more Battle for Zendikar goodness!