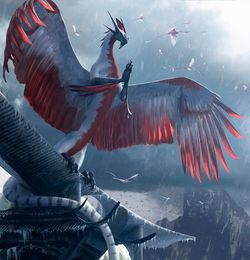 Hello everyone, and welcome back to Legit MTG. I hope you all are doing well, and are enjoying Double Masters. Keep in mind once you’re done reading this week’s article from me you can stop by the store link here on Legit MTG to purchase singles you need, as well as sealed products. Before How many of you miss playing old Standard cards, or even decks, after they have rotated out of Standard? I know I do, and it led me to create an article series called “Casually Speaking” on the site I wrote for prior to joining Legit MTG. I thought that now would be as good a time as any to bring this back.

As many of you know I am a true control mage at heart. I want to counter your spells, play some planeswalkers, and (assuming I run any creatures at all) have as few win conditions as possible to win the game. One of my favorite decks of all time is Esper Dragons. This archetype first appeared when Dragons of Tarkir was released, enhanced when Magic Origins provided us Jace, Vryn’s Prodigy, and still remained until Dragons of Tarkir left Standard. A lot has changed in Magic: the Gathering since then, and since I last wrote about Esper Dragons, so today I’ll be taking an extensive look at the archetype to see if we can sleeve it up for Friday Night Magic.

Your main goal is to land a Dragonlord Ojutai, and literally ride it to victory. In fact in all of the versions I will look at it is the primary way to win. You will have a variety of counterspells that you’ll want to use, as well as removal spells to keep the board clear before you untap to take your turn. Cards such as Anticipate will find cards you need early, as well as help fill your graveyard for Dig Through Time. Make sure you have a counterspell, or backup Dragonlord Ojutai available after you attack with yours in case it dies. Jace, Vryn’s Prodigy can provide additional use out of spells that are in your graveyard putting your opponent into a decision where either choice they make at that time should favor you.

While this deck had a lot of success during its time in Standard let’s take a look at how it could appear in the newest format: Pioneer.

Similar to its Standard incarnation the Pioneer version adds in hand disruption to prevent your opponent from executing their game plan while giving you time to establish your own. Instead of Jace, Vryn’s Prodigy we move to include Teferi, Time Raveler to help protect Dragonlord Ojutai during combat. The hit your opponent takes should allow you to sculpt a hand that includes a counterspell to protect it from a removal spell. In the event you are devoid of counterspells you have Gideon Blackblade as a backup option providing Dragonlord Ojutai vigilance which negates the opponent’s removal spells in hand. The numerous cycling cards (Neutralize, Fetid Pools, and Irrigated Farmland) help draw you cards as well as fuel Dig Through Time.

While this could be an interesting option let’s move on up to Modern to see how crazy things can become with an expanded card pool.

This is where things get interesting. Normally in a format like Modern, playing around having a big creature like Dragonlord Ojutai in hand in order for your spells to work only leaves you vulnerable to hand disruption. This is where we add in Changeling spells. These cards can be considered Dragons when using Silumgar’s Scorn to counter a spell, and thus increasing your number of “Dragons” in the deck overall. Considering other Dragons in the format we come upon Steel Hellkite which can help us remove certain permanents that slipped through our defenses. Coupled with hand disruption, and two types of Teferi planeswalkers, this deck can keep opponents off tempo long enough for you to take advantage, and control the game.

Why these decks may be for you

Why these decks may not be for you

It’s okay if decks like this are not for you, but keep in mind how difficult it can be to remove a creature that can not be targeted with any effect unless it is tapped. This requires it’s controller to be actively attacking, and for them to have a plan against whatever you do to remove it. The amount of planning, and interaction, should be highlights in the game that will feel different than it would against other Azorius or Esper based strategies.

While Esper Dragons once ruled the skies in Standard perhaps with the recent changes in Pioneer it can one again take flight off of the kitchen tables, and into your local Friday Night Magic. The powerful dragonlord has a lot of cards you can build around so make sure you are looking for the most potent, and efficient spells to give yourself an edge, as you fly towards victory.

What are your thoughts on these decks? Are there other cards you would play in them? Please leave your comments below, and follow me on both Twitter as well as Facebook.

I will return to discuss more things about the game we all love.