Hailing from Goblinville, IN, Ryan AKA the Goblin King has been brewing Standard decks since Kaladesh block. Ryan has only one goal as a competitive Magic player and that’s to participate in a pro tour where every participant brings with them only the finest in jank.

I’m gonna be honest right off the bat with this one and tell you that the only reason I am writing this article is simply for the edification of my older brother Matt, aka The Bear King (his words). Yep, I have no other intention but to make it so my brother, The Bear King, no longer sucks at drafting and no longer continues to embarrass me in front of my friends… “friends” whenever we go to the very hip, and somewhat local (WITH HOT FOOD) game store that we go to play Magic together at a few times a month.

I don’t know if I even have to start with number one as I’m sure the Bear King will never forget™ but it’s important that I know, that you know, that once you start drafting it’s absolutely imperative that you know that the first person you pass the pack to after you make your initial pick be the individual who is sitting to the left of you. Now really this doesn’t matter at all and if you forget someone will assuredly remind you, however, I need you to know this on the off chance that you end up at that one draft with that one guy who is ready to immediately drop gloves and start an altercation over the fact that you befoul the purity of this game by daring to pass in the wrong direction. “IT’S TO THE LEFT!”

Now that that little disclosure is out of the way, I want to really get into the meat and potatoes of what it takes to become a top tier, FNM DOMINATING drafter.

So there’s this color in Magic that is green. It’s called a fixer, and sort of like with the prism on that sweet, sweet Pink Floyd Album with the rainbow filtering through the glass triangle, you know that album that you can just smoke a… cigarillo to while you’re on the beach, wishing someone was there but really, truly, having but a care- THAT ALBUM.

Well much like the prism on the cover of Wish You Were Here, Green is the color in the Magic universe that allows for all of the other colors to exist and be utilized.

Why is this important to a new drafter? The answer to this question is fairly simple. If you’re a new drafter and you find that you’ve got a lot of good cards that cover a broad spectrum of the color-pie then it’s best to have that deck (if reasonable- you’ll need some good cards) be base green that is to mean that your deck has the majority of its manabase be able to cast green mana (or be something called a forest).

I’m sorry, seriously, I apologize. I don’t mean to get overly angry right at the start of this but if you knew what it was like drafting with The Bear King (he only drafts Bears), you’d realize how frustrating it is when he always comes to me empty handed (still no packs?) after every single draft despite the fact that he’s actually pretty smart and actually an above-average Magic player. And to be honest with you, I’m afraid that TBK will never overcome his addiction that is:

Not a single one:

The Bear King: “You know what, I think I’ll draft Bears!”

It has gotten worse though, the addiction has spread. It went from literally any synergy card whatsoever (Wizard Tribal, Clue Tribal, Artifact Tribal) to now, upon the printing of a little card called “Ayula, Queen Among Bears” just BEARS.

5 Modern Horizons Drafts in a row.

So that’s where I’d start, if you’re new to this whole thing- I’d just go ahead and tell you right off the bat to rid your mind of any preconceived notions you might have about finding the master synergy deck. It’s out there, that sweet, sweet Ninja, deck, and needle in a haystack you might find it but if you wanna git gud at drafting ASAP then you’ll have to put the tribal decks by the wayside. Draft the good cards, and only the good cards. Don’t draft a theme unless those good cards fit a theme. And never, under any circumstances whatsoever draft a bear deck.

2 colors. That’s another thing and this is 100% training wheels and it’s just cause you 100% aren’t any good or 100% haven’t done it so I think it’s best to move back to basics which means to limit yourself to two colors and no more.

Unless you want more out of life- that rainbow packaged goodness that is 5-COLOR PILE and if you want that dream to become a reality then this is what you must do. Mediocre playable or dual-land? Land. Halfway decent synergy card or land? Land. Bear or land? Bear… er land.

Like an addict looking for their fix, you can make the nonsense deck work but it’ll only happen if you make dual lands (and any color fixing things that say “add a mana of any color”) a priority earlier in packs then anyone else is. In fact I’d go so far as to say prioritize duals at a higher pick more then you normally would anyway.

Pick the removal, splash for the removal (add another color beyond the colors you already have), just make sure you have removal ‘cause this is one of the easiest ones to forget.

This is the most frustrating one with the Bear King as oftentimes it’s very clear to me that he hasn’t even begun to look through the volumes of HIGH QUALITY literature that are out there on the subject but I promise you it’s out there and just waiting to be consumed by you. Look for a tier list or a grading guide, read it, like actually read it, all 50 awkward puns and all and find out why is is that these mega nerds are winning while you aren’t.

This is the one that upsets me the most and tbh, it’s kinda upsetting but after having watched 2 (TWO) extremely well-prepared and seasoned players attempt to equip their equipment at instant speed in the past two days I feel the need to issue this statement. Yep, Bear King, my best advice would be to just say you won a GP or you’re top 5 in the world or something that you totally aren’t ‘cause the minute you tell them you’re new every Planeswalker can be cast at instant speed and well, god speed winning that war.

Figuring out your mana shouldn’t be so hard

Here’s how mana works. Count up all the different amounts of each color that you see on a card (two white mana will count as two in this equation), find the sum total of each color, then divide the number of each individual color you find by the total number of colors you found then multiply that number by 17. The number you get is the amount of the mana in question you need. EZCLAP

Remember Signs? That alien movie by M Knight where they had all these clues and all this buildup only for the movie to end with quite the lethargic bang when we find out that the aliens die to a freaking glass of water. Well, there are signs in Magic drafting too if you know where to look for them. Once you’ve done your HW, and realize that that rare Green Card that your pun buddies said was DOPE is being passed to you in your 6th pick, what that means is that that color is most likely open and even if you’re in something else, it wouldn’t be the worst idea to switch over. And if that doesn’t work and you lose anyway, try throwing water on your opponent and seeing if that causes their demise- because you just never know. 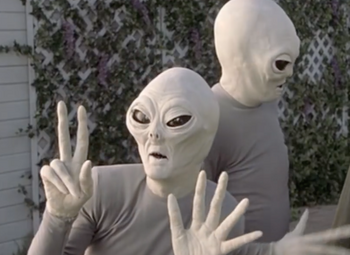 Now this one is actually an allegory for what I really mean but bear with me here. The Bear King is allergic to being on time-never has been, never will be. One time I called him out on it and his response was pretty enlightening. “Nah man, it’s like we’re the cool kids like they are from Top Gun, I’ll just walk up to them, give them a noogie (people he doesn’t know, he’s 32 btw) and be like, what’s up nerds- we’ll just be like Maverick, it’s cool man”. And I kinda feel him. But he never does that and I don’t get it. Dudes, charming, charismatic, has a beautiful wife, beautiful bear baby and everything a person could want. But the minute, the moment he gets to that table all that is out the windows and he’s supremely intimidated. Be like Maverick, Bear King. All of you. Be like Maverick. And for god’s sake- it’s to the left!