Journey into Nyx has been out in the paper world of Magic for the past couple of weeks. It was just released on Magic: the Gathering Online yesterday. While we waited for the release of the newest set to the digital world, there were multiple high profile Standard events that featured the newest set. Starcity hosted two Opens, one in Cincinnati and one in Knoxville. Tcgplayer.com hosted a 5k in Massachusetts. These events were won by Black Green Devotion, Red White Burn, and Mono Blue Devotion respectively. The format is relatively new, and with the attention of the Magic world on Pro Tour Journey into Nyx later on in the week and States (Yeah, it’s not the Limited State Championships, that is next week, and is the tcgplayer event. This weekend is Standard and is being run under the Starcity umbrella.) as well, I figured I would talk about the deck that I would play if I were going to go to one.

I’m not, I have my son, and I’ll be playing the video games with him instead of cards, but I see the current format, and I think that it can be attacked in a way. Of course if you paid any attention to the title you’ll see what I think is good in the current Standard environment. Let’s take a look at a sample list of what I would run this weekend.

The best part about this deck is not how much better the mana got with the addition of Mana Confluence. It’s not the inclusion of Deicide for hard to deal with enchantments. It is this art on MTGO. It cracks me up every time I see it, and after the boondoggle that was the lack of Journey into Nyx art on the client when V3 was turned back on, I hope this shining beacon of awesomeness remains on the client forever.

This tweet screen cap comes via a retweet by @NumottheNummy 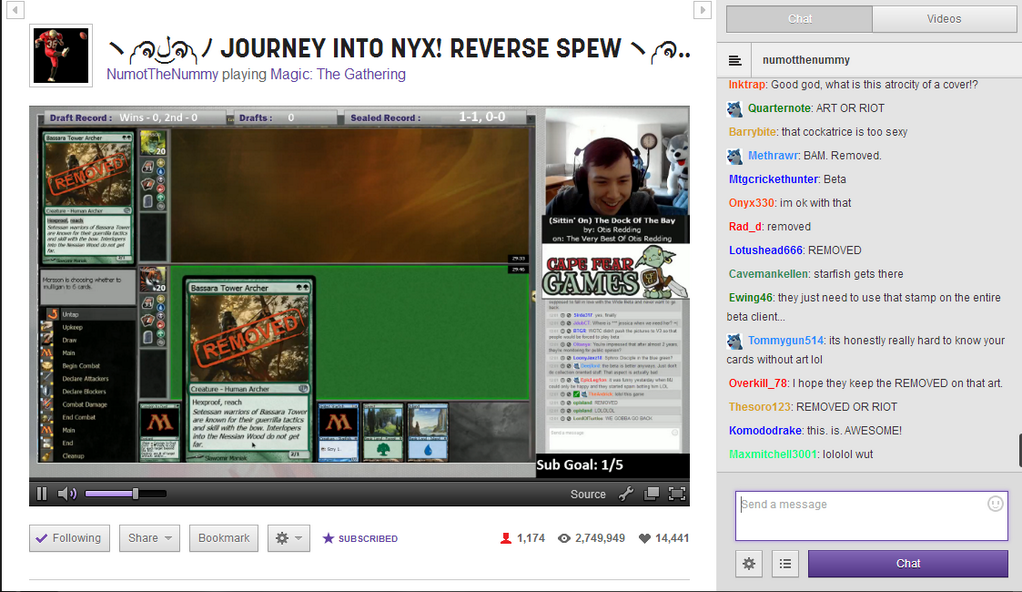 Poor WotC can not catch a break. Of course while this was going on people were filing for refunds and not getting them because well the cards still worked. That’s fine and all, but I know that I get enjoyment from playing the game, and it’s not because I can see a bunch of giant Ms. It’s because the art is great, and the game is also fantastic. I filed for a refund because I was not entertained. I would do the same thing if I went to a movie where the audio worked but the visual was not working. I filed my request around 2pm last Friday. I’ve not had a reply from customer service, and have even sent it in again. I had an issue with Hearthstone yesterday, and got done with customer service in ten minutes.

I digress, no one cares about my issues with customer service you all are here to see me play questionable Magic! I am 100 percent sure that I delivered on the questionable magic area in this video. We went 1-3 with the deck, which seems to be the opposite direction of the way that I wanted to go with the deck. Let’s check out the stream!

We played against UW Control in our first match. Things went well for the home team in game one, we sideboarded in our Mistcutter Hydras, and ignored our answer to Detention Sphere in Deicide. As you saw in game two our opponent kinda sorta cast 4 spheres. With no way to free our auras from the enchantment we were not able to keep up the pressure, and while our Hydras (Hail Hydra!) helped out a bit, the game turned into a twenty turn grindfest that saw us concede to Elspeth, Sun’s Champion. Game three we kept a high risk hand, and without the mana to actually cast anything in it we lost quickly.

Match two we battled against GW aggro, and again in game one we had an issue with mana. We lost it. Games two three, after boarding in Holy Mantle (that’s a sentence I never thought I would type.) we were able to find lands, and grind out a match win.

The third and fourth match saw us play against what is probably a bad matchup. Junk has Courser of Kruphix, Archangel of Thune, Obzedat, Ghost Council, and Blood Baron of Vizkopa. Not only does it have those giant lumbering dorks, the deck also has access to Abrupt Decay, which may turn out to the most backbreaking card that Hexproof can face. While it may not be able to kill our Gladecover Scout or Bassara Tower Archer, it sure does do work against our Madcap Skills and Ethereal Armor. The first match was not even close! We got blown out in short order. We ran it back and after quickly getting game one, games two and three did not work out for us. Golgari Charm and Abrupt Decay are just too strong!

Actually, it was not charm or decay that I felt we had an issue with, it was the creatures, and I think if we had room for Chained to the Rocks or Banishing Light or something we may have been better off. Of course I am suggesting things that still die to Decay and Charm.

While there may be a weakness to Decay and Charm I feel pretty good about the idea of Hexproof in Standard on the whole. It’s very explosive deck that is capable of ending games before they even get a chance to start! The sample list that I provided at the beginning of the article is a fine list, it’s had a good finish before, but I have to tinker with just about everything I see, so I made some changes to the list.

The changes that I made were very minimal. I went with Fiendslayer Paladin over Witchstalker because I think we want as many ways possible to gain life. Between Unflinching Courage, Gift of Orzhova and the Paladin aggro decks should have a real issue dealing the

damage needed to finish us off. While we lose the hexproof that Witchstalker gave us, we have another creature that cannot die Abrupt Decay and another source of first strike. With the most recent winning deck being Red White burn I think this is a good change. If you expect more Mono Black, Black Green or Mono Blue in your events, make the switch to four Witchstalkers though, I’m just making this change on what I expect to see.

I added a fourth Mana Confluence along with the Paladins. In theory we should have enough life gain in the deck to off set the damage we are doing to ourselves with our lands.

The last change I made was to squeeze in a few Banishing Light. I like the idea of having a way to deal with a troublesome permanent and the light does that.

In the board, we moved two mantles out for two Witchstalkers. I was happy with the board overall, and while mantle is great for the deck I felt that four was just too many. Adding Witchstalker is a concession to the black decks!

With that said, good luck at your events this weekend! We are very interested in hosting some State championship reports, so keep us at Legitmtg.com in mind if you’re looking to write one!