We’ve reached that time of year where Standard is boring, not because the format has been figured out, but rather it has a lame duck status. Theros block is about to rotate out, taking Thoughtseize, Courser of Kruphix, Elspeth, Sun’s Champion and a host of others with it. The myth inspired block was really cool, and I loved the story and flavor of it, but it’s time to move on to a new plane, one that needs heroes still, but instead of telling the heroic deeds of one (I’m looking at you Favored Hoplite) the stories told will be that of groups, or allies if you will!

Aether Vial decks have been one of my most favorite in Modern. You can do a lot of battling with an Aether Vial fueled battlefield, and while most of the time I have activated the artifact it has been to put a Merfolk into play, I had a bit of a revelation while looking up decklists on mtggoldfish.com.

Merfolk are by far the best tribe to take advantage of the vial. Having access to infinite (ok, closer to twelve) lords will make sure your creatures are big enough to take on even the most mighty of Tarmogoyfs. Slivers seems to take advantage of the vial as well. That tribe gets eight lords, but four of them are the gross awful to look at m14 slivers. Still, Adam Bowman is a master for taking the slivers to a top eight appearance at SCG Cincy. I’d never have the guts to play that at such an event. Death and Taxes runs the card as well, but the vial deck I want to talk about today has floated around a little on MTGO, and might be gaining some cards from Battle from Zendikar in a huge way!

Niran has been playing a Naya Allies list on MTGO, and while it is not the list that I am showing off in the video I feel like having it around as reference is really good, and I think it is closer to where I would take the deck.

While Niran has been doing well with the deck, Stephen Perigo took an Aether Vialless version to battle at Grand Prix Oklahoma City. It removes the artifact for some copies of Hardened Scales (and other things, but the decks are very similar in what they want to do.) which makes a ton of sense, because the amount of counters that get added to creatures in this deck is too damn high.

Sorry, I could not resist. Let’s take a look at the deck I played, and then let’s watch the deck in action.

Stephen said that he “wanted to play to play with Hardened Scales and Collected Company so I went with my own list. There’s still a lot of refining that needs to be done, but I liked what I had.”  Honestly Hardened Scales in Allies makes a lot of sense.  Hada Freeblade, Oran-Rief Survivalist, Kazandu Blademaster, Abzan Falconer and Talus Paladin all care about counters.  Dromoka’s Command can sometimes care about counters, depending on the modes that you pick.

Abzan Falconer in this deck is so smart.  The creature gives you a way to fly over the battlefield with your super giant allies.  Kabira Evangel, which is one of the reasons I want Vial in the deck, is another way to push through damage, thanks to the protection ability it has.

That was not the best stream. The mulligan decision was not one that I can look back fondly on, but it was for sure a misclick. We also did not have the best record. The deck was competitive, the mana was great, and the lack of Aether Vial was not a deal-breaker. I’m not entirely sold on Hardened Scales though.

Here is the decks I played against:

All times are approximate.

We went 2-3 this week, beating the Grixis and Esper decks and losing to the super aggressive burn deck and the sweet Miracle Grow deck. The deck was fun, even if I played poorly and made that super sweet misclick.

So where do we go from here? I do believe that Aether Vial is better than Hardened Scales, but what could Battle for Zendikar bring the Ally deck?

Seeing what has been spoiled so far there are a few cards I would want to try out.

First on the list is Ally Encampment. It’s mana fixing for the deck! Having a land that can give us any color not only smooths our plays but also allows us to maybe make a small splash. While that is not likely the best part of this card is the second ability. Pay one and sacrifice it to return an Ally from the graveyard to your hand. That’s a heck of a deal! I think this card being in the deck is almost a no brainer! 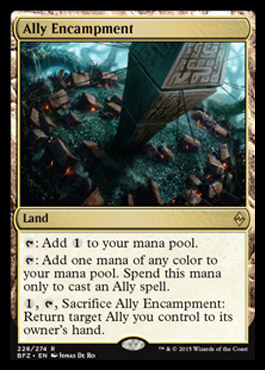 Ally Encampment seems pretty obvious as an inclusion, and while we are not in Black, with Mana Confluence, City of Brass and other lands, March from the Tomb looks like it could worth testing as well.  To me this is a great answer to a mass removal spell (durr), or an attack step.  Is it worth a black splash in the Naya deck?  Possibly?  Getting ally triggers is a great thing for the allies in play, and I really like the idea of casting Ondu Cleric, blocking with it, and then returning it via the March to pretty much gain all of the life.  It may also be possible that Naya Allies drops the red (as of right now it is just Akoum Battlesinger after all, but that would make playing the next card a little bit harder.) and goes to Abzan to facilitate casting March as often as possible.  It may also turn out that Return to the Ranks is just as good, but with the varied costs of Allies, just limiting yourself to two mana creatures may not be the best.  March is a card I am going to look when Battle for Zendikar hits MTGO for sure. 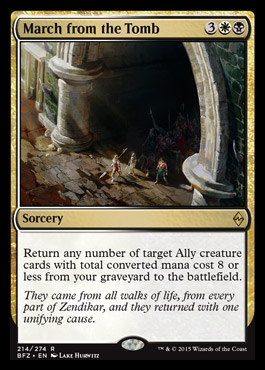 Next up is Munda, Ambush Leader. Easy to cast, and while it does not benefit from Collected Company, this hasty beater can help filter out dead draws from the top of the deck and make sure that you continue to draw allies which will continue to trigger the others! The 4 cmc is easily achieved with Vial as well. 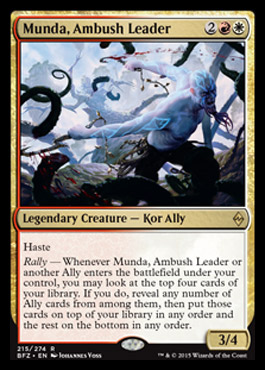 Veteran Warleader is next on our list of things to check out. It’s a 1/1 for 1GW, but will grow with as many creatures you have in play, which should make this a 3/3 more often than not when it comes into play. The activated ability is what I like the most about it. First Strike and Trample mess with combat math (surprise, you’ve been run over!) and Vigilance is a super nice thing to have if you need to leave a beefy blocker back on defense. 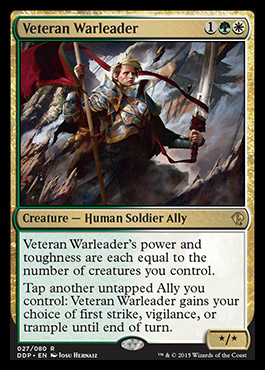 Beastcaller Expert might be worth looking at if you’re going into a splash. As it stands a 1/1 for two with haste is not as good in this deck as Akoum Battlesinger.

Hero of Goma Fada might be a nice addition as well. I would love to vial this into play in response to a Pyroclasm or Firespout.

Well I think that is it for me this week. I’m streaming on the legitmtg twitch channel now. I stream on Mondays and Thursdays, from 1pm Eastern Time to 3pm Eastern Time. Come check it out! I am sticking with Modern right now as we wait for Battle for Zendikar on MTG.

Thanks for stopping by!