Mike Keknee is a Magic grinder from the Columbus area. He has managed to put together a solid resume with four StarCityGames Open top 8s, including a win, as well as a Pro Tour appearance. He is also a co-host of the At Your End Step podcast available on iTunes and MTGCast.

If you are anything like me, then this is you during every banned and restricted announcement. 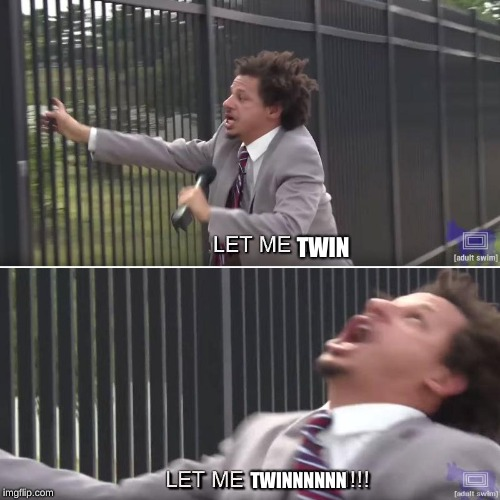 If you are not like me, and you are happy that Splinter Twin remains in exile like some forgotten copy token during my end step, then allow this piece to paint a picture for you. Splinter Twin was banned in January of 2016. This was the same banning that saw Summer Bloom be taken out of the fold as well. As history has shown us, that banning really didn’t destroy Amulet Titan, but the dreams of some true Kiki-Jiki, Mirror Breaker deck stepping up in the format to replace Splinter Twin didn’t really happen. Let’s revisit the reasoning that Wizards of the Coast gave for banning Splinter Twin.

“We also look for decks that hold a large enough percentage of the competitive field to reduce the diversity of the format.

Decks that are this strong can hurt diversity by pushing the decks that it defeats out of competition. They can also reduce diversity by supplanting similar decks. For instance, Shaun McLaren won Pro Tour Born of the Gods playing this Jeskai control deck. Alex Bianchi won our most recent Modern Grand Prix playing a similar deck but adding the Splinter Twin combination. Similarly, Temur Tempo used to see play at high-level events but has been supplanted by Temur Twin.

We considered what one would do with the cards from a Splinter Twin deck with Splinter Twin banned. In the case of some Jeskai or Temur, there are very similar decks to build. In other cases, there is Kiki-Jiki as a replacement.

In the interest of competitive diversity, Splinter Twin is banned from Modern.”

At the time we knew that Splinter Twin decks were popular, but I will always contend that they were the least degenerate combo deck the format has ever seen. When this deck was banned, players like LSV were running copies of Mulldrifter in their 75. A Mulldrifter deck was banned in modern; this is a travesty. WotC posited that blue based beck diversity was harmed by Splinter Twin. In the fallout of the banning though, two things became very clear.

Of course that first point has finally been shot down. Recently, a new UR deck has risen to finally join the ranks of other tier one decks – Izzet Phoenix. The Izzet Phoenix deck is the kind of deck Magic players love. It features a number of cantrip decisions, it has recursive/robust threats, and it plays Lightning Bolt – sound familiar? I knew we had reached peak Izzet Phoenix when Emma Handy suggested that players return to Keranos, God of Storms in their sideboards in one of her recent articles for StarCityGames. The deck already reminded me of Splinter Twin, and then the results from three huge Modern tournaments came in.

A glance at WotC’s reasoning for banning Splinter Twin, and then a glance at this snapshot of tournament results from different regions in the world on the same weekend, paint an eerily similar picture.

Now let me be clear. I am not advocating for the banning of Arclight Phoenix or any other such nonsense. It is too early to see if these numbers will hold. Wizards of the Coast is also unlikely to even consider banning Arclight Phoenix while it is still in print and with Modern Horizons on the, uh, horizon. I will suggest though that Izzet Phoenix is suffocating other blue and red decks. Storm and Jeskai control exist in small numbers. Grixis Death Shadow is a very different style of deck but has also waxed and waned in recent months.

So here is my conclusion (as the title of the article so carefully foreshadowed), Splinter Twin should be unbanned in the name of deck diversity. Izzet Phoenix and Splinter Twin are unique decks with different playstyles and win conditions. Both decks are powerful, but their operation (flash/counterspells versus the need to chain spells on your own turn) lead to unique styles of gameplay. I really can’t envision the nightmare scenario where the two decks are jammed together ala Twin Pod back in the day.

By unbanning Splinter Twin, various UR and Jeskai lists become viable and will open up deck diversity in the best blue decks. In addition to this, it adds a safety valve back into the format to fight decks that have been able to exploit how linear the format has become.

Hopefully this might pester some folks into talking about an unbanning. I really feel the Splinter Twin is a safe unban in the current format, and I certainly wouldn’t deceiver (exarch) any one.

Thank for reading. Feel free to yell at me below!